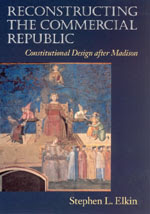 Beau Breslin, Department of Government, Skidmore College, has a new review at the Law and Politics Book Review of Stephen L. Elkin, RECONSTRUCTING THE COMMERCIAL REPUBLIC: CONSTITUTIONAL DESIGN AFTER MADISON (University of Chicago Press, 2006). Breslin begins:
Chief among Stephen Elkin’s many scholarly virtues is courage. Practically since he emerged as one of the most prominent and interesting constitutional theorists of the present generation, the University of Maryland scholar has seemingly been consumed with asking the types of questions so many lesser academics are uncomfortable asking....His greatest contribution to the study of constitutional thought comes from his courageous, and often successful, attempts to explore the normative dimensions of political authority.
RECONSTRUCTING THE COMMERCIAL REPUBLIC is his latest act of courage. It is also his best work to date. Indeed, the volume represents Elkin’s most comprehensive analysis of the current state of America’s commercial republic, a republic, he laments, that is at best misfiring and at worst altogether broken. Elkin cites a number of reasons for believing that the American republic is malfunctioning; chief among them is the fact that current political practice in the United States seems to permit – encourage, even – the type of self-interest that so often conceals the more important public or collective interest. Of course, this is an all-too familiar charge. We have heard it before. Yet what makes Elkin’s work so distinct is that he believes the answer to our twenty-first century problems lies first in pursuing an altogether different line of inquiry. Let’s start at the beginning, he seems to be saying, and ask the right questions, ones that probe at the very heart of the American experiment in republican government. Consider his strategy, articulated very early in the book. He writes, “To make real progress in understanding the American political order, we need, if not a new political science, at least a reworked one where efforts at explanation and evaluation are tied to the question of good political regimes and how they may be secured and maintained” (p.3). How to do that? [*114] Construct new theories of political constitution, he says, or more accurately, theories of “republican political-economic constitution” (p.4), that in essence confront the foundational issues of modern constitutional design.
And that is precisely what Elkin does....
For the rest, click here.
Posted by Mary L. Dudziak at 10:03 AM