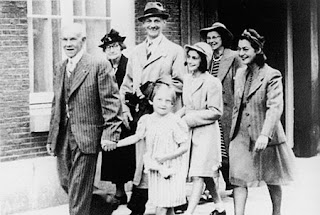 Widely reported in the New York Times and elsewhere, new records have been found relating to Anne Frank's father's attempt to get the family out of Holland as conditions worsened.

(In this 1941 photo, from the Anne Frank Foundation, Anne and her father Otto are in the second row.)

Here's the Press Release from the YIVO Institute for Jewish Research:

NEW YORK, Feb. 14, 2007 – Ever since the first publication of her diary in 1947, Anne Frank has been a very human symbol of the inhumanity of the Holocaust. The story of her family’s two years in hiding in an Amsterdam attic is known the world over. But what hasn’t been known is how desperately her father, Otto, tried to get his family out of the Nazi-occupied Netherlands – an effort that is detailed in a file of nearly 80 pages of original documents recently discovered in the archives of the YIVO Institute for Jewish Research.
The bulk of the file, which consists of personal correspondence and official records, spans dates from April 30, 1941, almost a year after Germany invaded the Netherlands, to December 11, 1941, the day Germany declared war on the United States. A month later, the first Jews from Amsterdam were sent to Nazi work camps, and six months after that, the Franks went into hiding. The final documents pick up in June 1945, when Julius Hollander, the brother of Otto’s wife, Edith, sought information about the family’s whereabouts, and end in early 1946, when he was able to contact Otto, the sole survivor, who had made his way back to Amsterdam after being liberated from Auschwitz in January 1945.
The discovery of the Otto Frank file was fortuitous, since it was not known to be among the millions of documents housed at YIVO, one of five partner organizations that comprise the Center for Jewish History in New York City.
“The documents appear to have come from the files of the National Refugee Service, which, along with other organizations, merged into HIAS (originally the Hebrew Immigrant Aid Society) in the 1950s,” stated Dr. Carl J. Rheins, executive director of YIVO. “Over the years, HIAS has turned over thousands of records to YIVO, and the Otto Frank file was transferred with tens of thousands of other case files that filled some 350 four-drawer filing cabinets that HIAS turned over to YIVO in early 1974.
It was not until mid-2005 that a part-time volunteer at YIVO, Estelle Guzik, happened upon the file in a manila envelope and realized its significance. Ms. Guzik was checking the work of other volunteers who had been indexing files to make them accessible to researchers, scholars, and families searching the YIVO archives, and noticed that the date of birth had been omitted next to the name of Otto Frank on the file. Looking in the folder, she saw the daughters’ names and birth dates and realized that this was Anne Frank’s father. Ms. Guzik immediately reported her discovery to executives of YIVO, who “embargoed” the documents until potential copyright and privacy issues could be determined.
“With the release of the file, the plight of the Franks becomes even more poignant, since the family was unable to escape even with the help and support of a prominent American, Nathan Straus, Jr., son of the founder of Macy’s and head of the U.S. Housing Authority, a New Deal Agency,” said Dr. Rheins. A college friend of Otto Frank’s from Heidelberg University in Germany, Mr. Straus plays a major role in the drama that unfolds through the documents, from the very first letter Otto Frank wrote to Mr. Straus in April 1941 to ask for financial assistance in securing affidavits necessary for immigration to the United States.
In that letter, Otto Frank apologetically writes, “I would not ask if conditions here would not force me to do all I can in time to be able to avoid worse.” He goes on to stress that it was “for the sake of the children mainly that we have to care for. Our own fate is of less importance.” At the time of the letter, Jews in the Netherlands were facing increasing restrictions, having already been banned from owning radios and banned from the Civil Service, among other prohibitions; and an order had been issued requiring the registration of Jewish businesses. More directly urgent to Otto Frank was the fact that evidence (not included in the YIVO file) suggests he was being subjected to blackmail by a Dutch Nazi, and feared exposure and imprisonment as a racial and political opponent of the Nazi regime.
Nathan Straus, Jr., and his wife, Helen, according to the file, made several appeals on the Franks’ behalf to the Migration Department of the National Refugee Service, and contacted the State Department for information and assistance. Another key player in the endeavors to get the Frank family out of the Netherlands was Edith’s brother Julius Hollander, who had immigrated to the U.S. in 1939 along with another brother, Walter, and whose employer, Jacob Hiatt of Worcester, Massachusetts, generously supplied an immigration affidavit for Anne and Margot. Julius and Walter had enough savings to help secure immigration for their mother, Rosa Hollander, who was living with the Franks in Amsterdam, but could not provide funds for the entire family.
Unfortunately, their efforts were in vain, due to the vast numbers of refugees seeking safe haven, as well as drastic tightening of U.S. immigration policy – based partly on fears that some immigrants might be spies or saboteurs....
Otto Frank was able to survive the horrors of Auschwitz and died in Switzerland in 1980. Edith died of starvation at Auschwitz. Anne and Margot died of typhus within days of each other at Bergen-Belsen....
The YIVO Archives hold more than 23 million documents, photographs, recordings, posters, films, videotapes, and items of ephemera, as well as thousands of handwritten, eyewitness accounts by Holocaust survivors and displaced persons. For further information, contact the YIVO Institute for Jewish Research 212-246-6080 or log on to www.yivo.org.

The full Press Release is here.

UPDATED: The Anne Frank Foundation's statement about the new records, and their desire for access, is here.
Posted by Mary L. Dudziak at 8:47 AM