New Release: Nelson, "Pathways to the Supreme Court: From the Arena to the Monastery"

New from Palgrave Macmillan: Pathways to the Supreme Court: From the Arena to the Monastery (Dec. 2013), by Garrison Nelson (University of Vermont). From the Press: 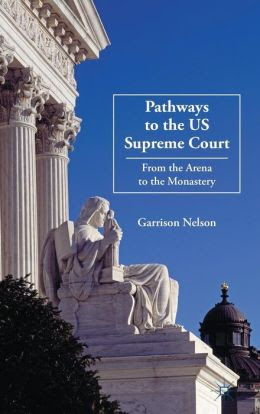 As the arbiter of the Constitution, it is presumed that the US Supreme Court decrees "the law of the land" in a fair-minded and even-handed manner. Key decisions in the Court's history have challenged these assumptions, giving way to a greater discussion about how judges are chosen, and the ideological roots from which they rule. This book explores more than two centuries of Supreme Court justice selections, tracking the Court's change from a time when consensus choices were relatively evenly divided between political leaders from "the arena," and judges from "the monastery," to a recent era fraught with controversial presidential appointees to federal positions that have yielded ideologically-influenced administrations of law.


"This fascinating, methodologically-inventive book advances our understanding of key issues in American politics. By systematically probing how Supreme Court Justices are selected, by helping understand the types of Justices, and by tracking ideology and voting patterns, Pathways to the Supreme Court offers important insights both into the Court's actions and standing." --Ira Katznelson

There are four routes to the Supreme Court-collateral, diagonal, vertical, and external. That is Garrison Nelson's analytic framework in this work stretching across two centuries of Court history. The book is loaded with fascinating information about where the justices have come from, why, and so what. As always, Nelson is sure-footed and meticulous." --David Mayhew