Ken MacMillan, Sovereignty and Possession in the English New World: The Legal Foundations of Empire, 1576–1640 (Cambridge University Press, 2006) is reviewed in the Law and History Review by Stuart Banner, UCLA. Banner writes:

A lot has been written lately on the intellectual roots of the European colonization of the Americas, much at a high level of generality. In this short and engaging book Ken 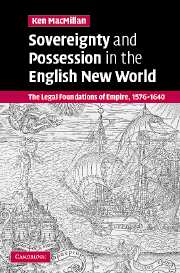 MacMillan takes a close-up view of a thin slice of the subject. He limits his attention to England; we hear of other parts of Europe only as competitors for control of the New World. He ends his story in 1640, when the English colonial enterprise was only just getting started and before many of the frequently cited works on the topic were written. He discusses only English claims vis-à-vis other European countries. As he makes clear at the outset, the book does not encompass English claims to sovereignty or property as against American Indians. And he concentrates throughout on distinctly legal modes of argument, rather than political or philosophical argument more broadly. The result is a tightly focused and clearly argued exploration of the early English legal justifications for why England, rather than Spain, France, or anyone else, had the right to claim the parts of North America that would become English colonies.

MacMillan emphasizes the importance of Roman law and its derivatives in constructing the legal basis of colonization. England was still legally pluralistic, he reminds us in the first chapter, and Roman or Roman-flavored law still played an important role. This was particularly true with respect to overseas territories, which, he argues (taking sides in a very old debate), were understood to be outside the ordinary domestic legal system and thus not subject to the common law. By relying on concepts of Roman law, England was, in effect, joining the continental European colonizers in collectively creating a supranational body of law governing the allocation of territory in the New World.

In the second chapter, MacMillan credits the sixteenth-century intellectual John Dee with being the leading early English legal theorist of colonization. (MacMillan has previously edited a scholarly edition of The Limits of the British Empire, which he calls "Dee's imperial tour de force." [51]). Well-versed in civil law, Dee relied on Roman law for the proposition that discovery and actual possession were prerequisites for the exercise of sovereignty, a principle that quickly became the foundation of English claims to North America. The remaining four chapters show how this principle was implemented in practice, in the wording of colonial charters (chapter 3), in the fortifications the English built in North America (chapter 4), in the maps the government published (chapter 5), and in the arguments used by English officials while negotiating against their Spanish and French counterparts (chapter 6).

The book's narrow time frame and subject matter allow MacMillan to dig deeply into manuscript sources, most of which are from the British Library and the UK National Archives (the former Public Record Office). He has found some fascinating stuff. He is able to show, for example, that the maps the English government allowed to be published differed in important respects from the unpublished maps the government kept for its own use. He argues, persuasively I think, that the government faced conflicting incentives. On one hand, secrecy was crucial, because the government was afraid to reveal too much information about North America to its Spanish and French rivals. On the other hand, publicity was crucial too, because maps were devices for demonstrating that claims to sovereignty were backed up by exploration of the claimed areas. The solution was deliberately to publish incorrect maps.

Any book that concentrates on a small picture will leave readers wondering about matters lying just outside the frame. To what extent did English colonial theorists distinguish between sovereignty (the right to govern) and possession (the ownership of property) in North America? MacMillan always treats them together, but were they always treated together at the time? To what extent were the arguments for English rights as against France and Spain also used to justify English rights as against Indian tribes? How much English theorizing about colonization was successfully transplanted to North America, and how much had to be modified in response to conditions on the ground? To raise questions like these is not to criticize MacMillan but to praise him, for writing a book that will surely prompt others to pick up where he has left off.
Posted by Mary L. Dudziak at 9:23 AM