Holton, Unruly Americans and the Origins of the Constitution, among 2007 National Book Award nominees 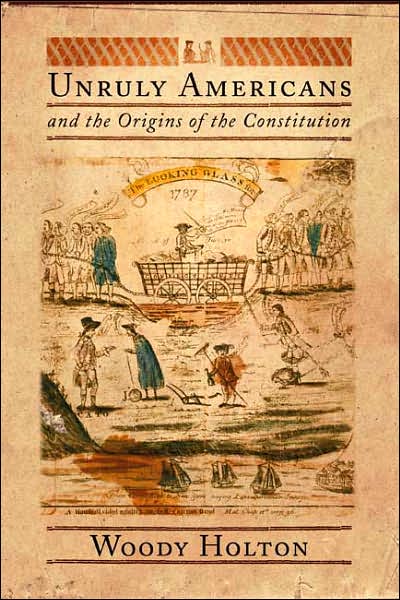 Don't let anyone tell you that constitutional history is arcane and uninteresting. If you hear that from an editor, remember this: Woody Holton, Unruly Americans and the Origins of the Constitution (Hill and Wang/Farrar, Straus & Gioux), is among this year's National Book Award nominees in Nonfiction. Hat tip. Joining Holton on the list are:

Edwidge Danticat, Brother, I’m Dying (Alfred A. Knopf)
Christopher Hitchens, God Is Not Great: How Religion Poisons Everything (Twelve/Hachette Book Group USA)
Arnold Rampersad, Ralph Ellison: A Biography (Alfred A. Knopf)
Tim Weiner, Legacy of Ashes: The History of the CIA (Doubleday).
Legal history luminary Annette Gordon Reed is among the nonfiction judges.
Here's Holton's book description:
Woody Holton upends what we think we know of the Constitution’s origins by telling the history of the average Americans who challenged the framers of the Constitution and forced on them the revisions that produced the document we now venerate. The framers who gathered in Philadelphia in 1787 were determined to reverse America’s post–Revolutionary War slide into democracy. They believed too many middling Americans exercised too much influence over state and national policies. That the framers were only partially successful in curtailing citizen rights is due to the reaction, sometimes violent, of unruly average Americans. If not to protect civil liberties and the freedom of the people, what motivated the framers? In Unruly Americans and the Origins of the Constitution, Holton provides the startling discovery that the primary purpose of the Constitution was, simply put, to make America more attractive to investment. And the linchpin to that endeavor was taking power away from the states and ultimately away from the people. In an eye-opening interpretation of the Constitution, Holton captures how the same class of Americans that produced Shays’s Rebellion in Massachusetts (and rebellions in damn near every other state) produced the Constitution we now revere. About the Author
Woody Holton is an associate professor of history at the University of Richmond and the author of the award-winning book Forced Founders: Indians, Debtors, Slaves, and the Making of the American Revolution in Virginia.
And some blurbs:
"Woody Holton reframes the coming of the Constitution, revealing the rich debate Americans conducted over the cause of capital in the new land. In this account, real people—farmers, soldiers, taxpayers, speculators, creditors and entrepreneurs—replace images of the Founders, and intimate issues like tax fairness, economic effects, and electoral accountability matter far more than abstractions. The result is a new and compelling history." —Christine Desan, Professor of Law, Harvard Law School
"Move over, Founding Fathers. It turns out that average Americans from the ‘unruly mob’ had more to do with insuring the personal liberties we Americans now hold dear than did the Framers we so revere. Woody Holton’s fascinating and energetic new book makes us take a fresh look at the Constitution, especially the Bill of Rights. The populist underpinnings of our Republic are real, and this has clear implications for the role that citizens ought to play today in reforming American democracy. Holton’s lesson: If the establishment won’t change the system, the people can. They’ve done it from the beginning." —Larry J. Sabato, Director, Center for Politics, University of Virginia
Posted by Mary L. Dudziak at 8:02 AM

I recently read David Stewart's "The Summer of 1787" and found it fascinating even though relatively short. I hope the Social Law Library gets Woody Holton's new book to perhaps fill in some blanks. But Stewart's book did focus on commerce and slavery and centralized government. Perhaps Holton will have more connections. What was amazing was the fact only 43 men were involved in the Summer of 1787 with drafting the Constitution.