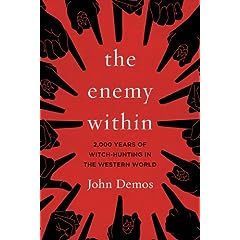 John Demos's "intriguing" new book, The Enemy Within: 2,000 Years of Witch-Hunting in the Western World, is reviewed by Art Winslow in the Chicago Tribune. Winslow writes that "Demos' heavily researched look at what he terms a collective fantasy is in a larger sense an analysis of the phenomenon of public frenzy, in which an "aura of immense danger" is attached to fears of subversive conspiracy."

Andrew Cayton reviews AMERICAN LION: Andrew Jackson in the White House by Jon Meacham for the New York Times. "Early in “Moby-Dick,” Melville announces his intention to celebrate the “democratic dignity” of ordinary men," Cayton writes. Meacham "discerns a similar democratic dignity in the seventh president of the United States. But he underplays the consequences of his subject’s darker qualities, especially the fact that, like Captain Ahab, Jackson was willing to destroy everything in order to exact re 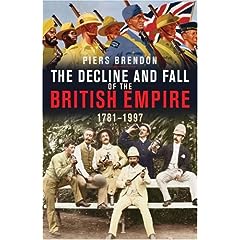 venge." Cayton finds the book "enormously entertaining," but thinks the author "has missed an opportunity to reflect on the nature of American populism as personified by Jackson."
THE DECLINE AND FALL OF THE BRITISH EMPIRE, 1781-1997 by Piers Brendon is a "splendid work," according to Karl E. Meyer in today's Washington Post. Meyer places the book in the context of Edward Gibbon, History of the Decline and Fall of the Roman Empire, lauding Brendon's "persuasive demonstration that Britons have repeatedly searched for omens in the pages of Gibbon."
Negro with a Hat: The Rise and Fall of Marcus Garvey by Colin Grant is reviewed in the New Republic by Steven Hahn, who finds it "a searching, vivid, and...complex account of Garvey's short but consequential life," that nevertheless lacks "a deeper sense of the historical context."
Posted by Mary L. Dudziak at 10:37 AM