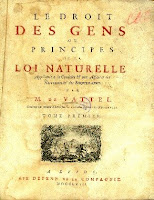 I wonder whether there will be a publication of the papers presented following the conference? I would be more than interested in it, since I am doing my PhD in early modern political culture and my focus is shifting, as it seems, to ius gentium and its perception by the contemporaries.