History makes it out of the book pages and onto the front page of the New York Times today, with a curious article about a controversy over Stanley Kutler's transcriptions of the Nixon Tapes in Abuse of Power: The New Nixon Tapes. Jeremy Young at Progressive Historians raises the issue that it's odd that the hook for the news piece is the fact that an article by a Kutler critic is under review at the American Historical Review, a normally confidential review process. Hat tip.

DARWIN’S SACRED CAUSE: How a Hatred of Slavery Shaped Darwin’s Views on Human Evolution by Adrian Desmond and James Moore, and ANGELS AND AGES: A Short Book About Darwin, Lincoln, and Modern Life by Adam Gopnik are reviewed by Christopher Benfey in the New York Times. As Benfey puts it:

Two arresting new books, timed to co­incide with Darwin’s 200th birthday, make the case that his epochal achievement in Victorian England can best be under­stood in relation to events — involving neither tortoises nor finches — on the other side of the Atlantic. Both books confront the touchy subject of Darwin and race head on; both conclude that Darwin, despite the pernicious spread of “social Darwinism” (the notion, popularized by Herbert Spencer, that human society progresses through the “survival of the fittest”), was no racist. 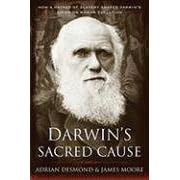 nfey, Desmond and Moore "set out to overturn the widespread view that Darwin was a 'tough-minded scientist' who unflinchingly followed the trail of empirical research until it led to the stunning and unavoidable theory of evolution. This narrative, they claim, is precisely backward. 'Darwin’s starting point,' they write, 'was the abolitionist belief in blood kinship, a ‘common descent’' of all human beings."
Gopnik’s book "takes its impetus from a striking historical coincidence: 'On Feb. 12, 1809, two baby boys were born within a few hours of each other on either side of the Atlantic.' Those babies, one rich and one poor, as in a plot of Mark Twain’s, were Darwin and Abraham Lincoln." Gopnik focuses on both men as writers, finding them to be "nearsighted visionaries." Continue reading here.
Sweet Land of Liberty The Forgotten Struggle for Civil Rights in the 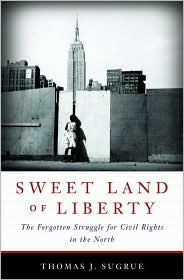 North by Thomas J. Sugrue is reviewed in the Chicago Tribune by James Ralph. He finds it

a seminal study, a rare book that offers a sweeping interpretation of a broad swath of American history. Sugrue begins his story in the 1920s and 1930s and extends it virtually into our own time. His spatial sweep is also striking. He concentrates on the Northeast and the Midwest, especially those states with the largest African-American population....Despite its breadth, "Sweet Land of Liberty" is more than a compendium. It is animated by a strong sense of the complexity of historical change. Given that Sugrue has already established himself as a leading interpreter of the postwar urban crisis, it is not surprising that public policy and structural forces—like demographic and economic change—shape its analysis.

Meanwhile, the Los Angeles Times has an Abraham Lincoln round-up.
Posted by Mary L. Dudziak at 10:05 AM