Who Will Write Our History? Rediscovering a Hidden Archive From the Warsaw Ghetto by Samuel D. Kassow, is a "brilliant study" and "a heroic act of synthesis 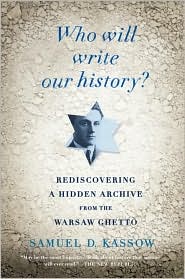 and contextualization," writes Louise Steinman for the Los Angeles Times. The book is based on Emanuel Ringelblum's efforts to document the experience in the Warsaw Ghetto. "In October 1940," Steinman writes,

when the Germans gave the order for Warsaw Jews to move into an overcrowded, cramped and sealed-off ghetto -- more than 400,000 would live there; 30% of Warsaw's population crowded into 2.4% of its area -- Ringelblum "stepped into his destiny." He began forming a secret "sacred society" he named "Oyneg Shabes" (literally, "Joy of the Sabbath," as members often met on Saturday). Its purpose was to create a comprehensive archive of life in the ghetto, "to meld thousands of individ

ual testimonies into a collective portrait."...

No one knew what information would be important to historians after the war. "Collect everything and sort it out after the war," Ringelblum advised. And they did.

They recorded ugly stories of Jewish policemen and moral struggles among those who were starving. They collected information on labor camps, the behavior of the Judenrat (Jewish councils that acted as intermediaries with the Nazis), and social histories of the soup kitchens. They interviewed refugees from the provinces who brought eyewitness accounts of massacres. They documented the role of women in the ghetto and the plight of orphaned children.

Tin boxes containing parts of the Oyneg Shabes archive, buried in the rubble of the Warsaw Ghetto, were found in 1946. The archive reveals that "Ringelblum never succumbed to what he defined as the ultimate despair: the failure to record what one saw."
Continue reading here.
The War Behind Me: Vietnam Veterans Confront the Truth About U.S. War

Crimes by Deborah Nelson is taken up by Steve Weinberg in the Philadelphia Inquirer. The review details another story of a forgotten archive, this time a cache of documents about Vietnam-era war crimes in the National Archives. After the revelations of the Mai Lai massacre, Weinberg writes, "in secret, the Army began a broader inquiry into other alleged war crimes throughout Southeast Asia. The inquiry lasted five years, resulting in a file of about 9,000 pages connecting American troops to atrocities. The inquiry led to no public accounting, no major prosecutions of the perpetrators." Nelson and military historian Nicholas Turse, "after reviewing the archival files carefully...began tracking down military veterans who had reported allegations of atrocities and those who allegedly had conducted the killing. Nelson, with a well-deserved reputation as a master interviewer, explains how she persuaded some of the frightened and resentful veterans to talk openly." Continue reading here.

THE DAY WALL STREET EXPLODED: A Story of America in Its First Age of Terror by Beverly Gage is reviewed by Kevin Baker in the New York Times. He writes that this "outstanding first book" takes up in detail a 1920 Wall Street bombing which killed 38, as well as "the hunt for the perpetrators, but Gage also does us the great good service of placing it in the wider history of industrial warfare that once proliferated in America....'Far from being an era of placid reform,' Gage writes, 'the turn of the century was a moment in which the entire structure of American institutions — from the government to the economy — seemed to be up for grabs, poised to be reshaped by new movements and ideas.'...Even now, as Gage writes, 'there remains a tendency to think of violence as an anomaly, something outside the American experience, rather than as one of the many ways that Americans have long carried out their political disputes.'" Read the rest here.
Photo credit: Emanuel Ringleblum.
Posted by Mary L. Dudziak at 11:08 AM