Reviewed: Books on The American Future, women soldiers in Iraq, Israel and Palestine in 1948, and Vanderbilt

THE AMERICAN FUTURE: A History by Simon Schama is reviewed in the Boston Globe. Glenn C. Altschuler writes:

In "The American Future," Simon Schama, a professor of history at Columbia University, looks to an alternative America "that was actually there all along" to address the disintegration of the nation's moral authority and economic security. Grounded in the Declaration of Independence and the US Constitution, this America, he argues, views government not as the enemy of freedom and free enterprise but as their guardian and guide. This America is inclusive and tolerant, accepts natural resources as a public trust, and does not go to war without good and sufficient cause.

In the New York Times, David Brooks has a different take, calling it a "Brilliant Book" that "has nothing whatsoever to do with the American future." The Brilliant Book, it turns out, is "the most punishing of literary cages." For the brilliant writer involved in such a project,

Along the way, his writing will outstrip his reportage. And as his inability to come up with anything new to say about this country builds, his prose will grow more complex, emotive, gothic, desperate, overheated and nebulous until finally, about two-thirds of the way through, there will be a prose-poem of pure meaninglessness as his brilliance f

inally breaks loose from the tethers of observation and oozes across the page in a great, gopping goo of pure pretension.

These are the moments we Brilliant Book aficionados live for.

The Lonely Soldier: The private war of women serving in Iraq by Helen Benedict has been reviewed in the L.A. Times. Deanne Stillman writes that as "Benedict documents in her important, finely drawn book,...many find out they're fighting two wars: the one against the official enemy and the one against their male compadres." A play based on Benedict's book was performed in New York this spring.

In the New York Review of Books, Gershom Gorenberg takes up 1948: A History of the First

Morris has returned again and again to writing about 1948, as if he wakes up every morning anew in that year, inside the impossible trauma of Israel coming into existence as the Palestinians go into exile, rewriting it, dissatisfied, still seeking to get the story right, trying to fulfill the credo he has set:

"I believed, and still believe, that there is such a thing as historical truth; that it exists independently of, and can be detached from, the subjectivities of scholars; that it is the historian's duty to try to reach it...."...

Rather than focusing on the exodus, 1948 is a military 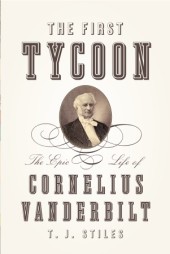 history of the entire war.

Read the rest of this extensive review is here.

THE FIRST TYCOON: The Epic Life of Cornelius Vanderbilt by T.J. Stiles is reviewed by Alice Schroeder in the Washington Post. Schroeder writes that

Vanderbilt's colorful battles made him a magnet for mythology. Much of what has been written about him until now was dictated by his enemies. Stiles, a superb researcher, has unearthed quantities of new material and crafted them into the illuminating, authoritative portrait of Vanderbilt that has been missing for so long; Stiles has also debunked several myths about Vanderbilt, such as that he showed no tenderness toward his family and that he died of syphilis.