The Coleman Karesh Law Library of the University of South Carolina School School of Law has mounted an exhibit exploring the lives and law practices of five generations of South Carolina lawyers through the medium of a nineteenth-century law library it acquired for its South Carolina Legal History Collection in August 2007. (Among the original owners was Charles Jones Colcock, 1771-1839, pictured below.) In addition to the physical exhibit, the law librarians have prepared quite a good virtual one here. It commences: 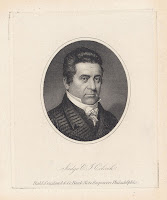 To celebrate the 25th anniversary of the South Carolina Legal History Collection, the Coleman Karesh Law Library has mounted an exhibit exploring the lives and law practices of five generations of South Carolina lawyers. In August of 2007, the Law Library received a donation of 419 books that had been part of the library accumulated by five generations of Colcocks and Hutsons, lawyers who lived in Beaufort, Jasper, and Hampton Counties from 1744 to 1939. The donor, Charles Cook, had been given the books by a family friend, Miss Dollie Hutson, forty-five years earlier, in the summer of 1962. Mr. Cook was the son of a Presbyterian minister who was serving two churches in the lowcountry, one of them Stoney Creek Presbyterian Church in McPhersonville, SC. When Miss Hutson, a member at Stoney Creek, learned that the younger Mr. Cook was about to enter law school, she decided to give him the books that her great-great-grandfather, great-grandfather, grandfather, father, and brother had used in their own law practices. The books had survived several wars and a great depression. While Mr. Cook never used the books in his own practice, which included fourteen years as Reporter of the South Carolina Supreme Court, he kept the library intact and his donation provides a vehicle for examining the practice of law from the eighteenth, through the nineteenth, to the early twentieth century.

Really interesting list of books--thanks for this, Dan. The presence of a large number of post-war (er, post-Civil War) books makes me wonder about when this library was assembled (and perhaps partly disassembled). Looks like it was put together over several generations. There're fewer non-South Carolina US volumes in there than I might expect, so this might be sort of the remnants of a library. The most useful for the antebellum period wandered off, perhaps....

Very happy to find your post and the terrific image of Judge Charles Jones Colcock b 1771 which also exists as handpainted color miniature at the Gibbes Museum of Art in Charleston. My blog post called "Libraries the Law and Gingko" relates to the family (Charleston, SC, beginning in about 1730 with mariner father John Colcock, Sr.) Nearly every one of his descendents practiced law until this name became extinct in the male line. This was a family law library, gathered in McPhersonville, SC and passed on to Mr. Cook, the son of a minister there. I am a Hutson cousin and have another who is an attorney in El Paso who knows quite a bit about the Hutson & Colcock attorneys and the history of this library and lots about those people whose books they belonged to, if you'd care to delve further. I am sure he'd oblige. Come visit my blog! http://www.CharlestonArtHistory.com