Vladek on Justice Jackson, Internment, and the Rule of Law After the Bush Administration

Justice Jackson, Internment, and the Rule of Law after the Bush Administration has just been posted by Stephen I. Vladeck, American University - Washington College of Law. It appears in WHEN GOVERNMENTS BREAK THE LAW: T 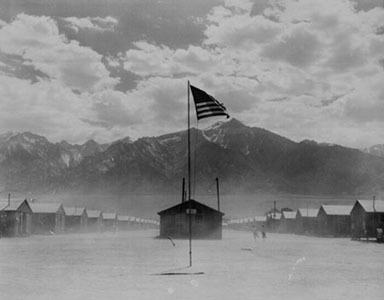 HE RULE OF LAW AND THE PROSECUTION OF THE BUSH ADMINISTRATION, Austin Sarat, Nasser Hussain, eds. (2010). Here's the abstract:

The contemporary debate over whether senior Bush Administration officials should be investigated (and potentially prosecuted) for their role in the U.S. government's torture of individuals detained as "enemy combatants" during the war on terrorism has been curiously indifferent to American history. Even the most modest perusal of that history reveals - perhaps surprisingly - little precedent for holding personally to account those senior government officials most responsible for our gravest civil liberties and human rights abuses. Perhaps the most prominent example comes from one of the darkest civil liberties chapters in American history, the exclusion from the West Coast and internment of over 120,000 Japanese nationals and U.S. citizens of Japanese descent during World War II, and the implicit but unequivocal legal sanction given to these measures by the Supreme Court in a trio of rulings culminating with Korematsu v. United States in December 1944.

As this chapter argues, more than just a temporal bookend, both Korematsu's holding and its history provide illuminating lenses through which to situate these contemporary debates. In particular, the future Justice Jackson warned about in his enigmatic dissent never materialized; and the moral judgments to which he referred have been, at least over time, rather unkind. Korematsu's reasoning has been soundly discredited (and never again invoked as authoritative); Fred Korematsu's conviction has been vacated; and the internment camps in general are today almost universally condemned as one of the darkest civil liberties chapters in modern American history - so much so that Congress formally apologized for the camps in 1988.

Moreover, and critically, this consensus narrative discrediting internment in general and Korematsu in particular has emerged even though no one was ever held personally liable for the policies that led to the camps. No military or executive branch official was prosecuted or sued for violating the internees' rights; no government lawyer was disbarred - despite proof that the Justice Department affirmatively misled the courts as to the gravity of the military threat posed by Japan, especially in the second round of briefing before the Supreme Court in Korematsu. In short, we have come to accept the wrongfulness of internment, even without clarity as to the specific legal violation that internment represented or the personal liability of individual government officials for its commission. Somehow, the conclusion seems inescapable today that the rule of law in the United States eventually survived the damage wrought by Korematsu, notwithstanding (or perhaps thanks to) Justice Jackson's fear that it might not.

The question - and the central focus of this chapter - is whether Jackson's understanding of the relationship between internment and the rule of law, and the subsequent creation of internment's historical memory, might help us to assess the stakes of today's debate. Put another way, if, like the majority opinion in Korematsu, the OLC opinions - and not the acts of torture themselves - pose the real danger to the rule of law going forward, are there lessons that we can learn from the creation of internment's historical narrative (at the expense of Korematsu) that will help us undo whatever damage the OLC opinions have caused, and perhaps without individual criminal liability?

Photo credit.
Posted by Mary L. Dudziak at 7:53 AM