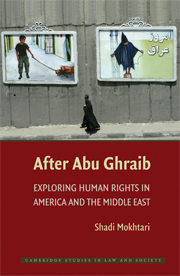 Shadi Mokhtari's After Abu Ghraib is original and conceptually incisive in its argument that much-publicized U.S. violations of human rights--epitomized by Abu Ghraib--have helped stimulate a healthier human rights discourse in both the Middle East and, to a lesser degree, the United States. This argument, very much contrary to common wisdom, is grounded in both field research and theoretical interdisciplinarity. This combines to give the book's arguments a depth lacking in more one-dimensional takes on human rights, and confronting on-the-ground contradictions encountered in field research lends her conclusions a realistic diffidence. Mokhtari makes a convincing case that both human rights offenders and defenders have too often contributed to a distorted construct of human rights that poses the United States as a leader needed to advance human rights globally. U.S. leadership implies U.S. ownership. This understanding of ownership reinforces the misbegotten cliché of a West to East flow of human rights, a cliché that is a death sentence for human rights in other parts of the world. To the contrary, as Mokhtari makes clear, human rights' legitimacy flows out of the degree to which human rights are identified with local actors and normative frames. Thus, the paradox that Mokhtari explores: as the United States egregiously violated human rights over the last decade, it made itself a target of human rights-based criticism from around the world. This gave human rights, ironically, greater credence and legitimacy in many parts of the world, opening space for advancing a rights-based normative frame--especially in the Middle East.

Continue reading here.
Posted by Mary L. Dudziak at 5:45 AM