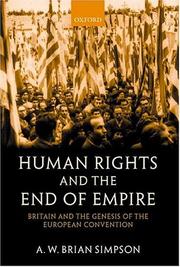 Update: I was so sorry to hear this news. Thanks to Dan for posting. I wanted to add that for anyone with an interest in human rights, or in transnational history, or simply in great works of legal history, Simpson's book Human Rights and the End of Empire: Britain and the Genesis of the European Convention is a must read. I only had an opportunity to meet Prof. Simpson once. I was doing a workshop at Michigan, and he was my commentator. He was as warm and kind as he was brilliant. His students and colleagues are fortunate to have had such a presence among them. MLD

A further update: Here is a link to a podcast of Professor Simpson 2008 lecture "Detention without Trial in Wartime Britain," delivered at the Aspen Institute, for the Foundation for Law, Justice and Society, "an independent institution affiliated with the Centre for Socio-Legal Studies at the University of Oxford." As the synopsis has it, the lecture is "an account of the response of the courts to detention without trial during World War II, in which they largely abandoned any role in protecting civil liberty." Simpson further argued that "the European Human Rights Act of 1998 has radically altered this position, though the inherent problems involved when regular courts monitor the activities of security services in times of crisis persist today. DRE
Posted by Dan Ernst at 8:39 AM

Rest in peace, sir.
Your "simpsonizing" method has contributed greatly to our Canadian Legal History class here in McGill.
My Prof in McGill is a great fan of yours, too.

I am sorry to hear about Prof. Simpson's passing.

He was my property law prof at Michigan Law School in the early 1990s. I am surprised that he was only in his late 50s then, as he seemed even older (perhaps just a products of British University mannerisms he so theatrically employed).

He relished the arcana that was particularly the province of first year property - whiteacre, blackacre, the fee entail, the Rule Against Perpetuties, etc.