Journalist and biographer Kay Mills, 69, died of a heart attack this week in Santa Monica, California.  Mills will be best known to LHB readers as the author of the first full-length biography of civil rights legend Fanny Lou Hamer. This Little Light of Mine:  The Life of Fannie Lou Hamer is a riveting account of Hamer's life as a sharecropper in Mississippi and the path that led her to capture the nation's attention during the 1964 Democratic National Convention.  The Mississippi Freedom Democratic Party challenged the regular Mississippi delegation, since African Americans in the state were disenfranchised. "If the Freedom Democratic Party is not seated now, I question America," Hamer said in powerful, televised testimony. "Is this America? The land of the free and the home of the brave? Where we have to sleep with our telephones off the hook, because our lives be threatened daily." As a compromise measure the Democratic Party leadership offered the MFDP delegation two seats, which they refused. Hamer said: "We didn't come for no two seats when all of us is tired." 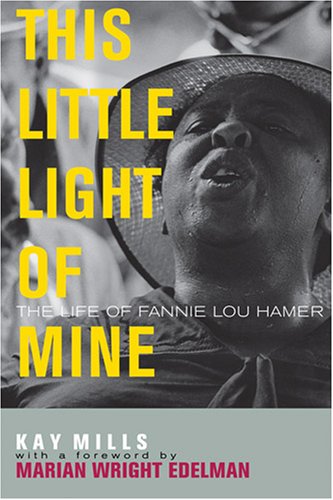 Mills' book was awarded the 1993-94 Julia Spruill Book prize for the best book on Southern women's history from the Southern Associaiton of Women's Historians.  A pioneering journalist once denied a job when an editor asked "what would you do if someone you were covering ducked into the men's room?" Mills was also the author of Something Better for My Children: How Head Start Has Changed the Lives of Millions of Children and Changing Channels: The Civil Rights Case that Transformed Television and other works.  More about Mills and her work is here.

Kay Mills was also my neighbor for a number of years when I first moved to Santa Monica to teach at USC.  Meeting her was an immediate affirmation that intellectual life in Southern California is not a non-sequiter, and that vibrant writers and ideas are to be found outside the academy, and sometimes right down the street.  She will be missed.
Posted by Mary L. Dudziak at 5:43 PM