With hopes of encouraging readers to continue supporting Japan relief and recovery efforts, a spotlight on recent scholarship on Japanese legal history: 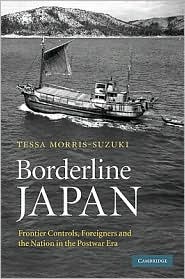 This book offers a radical reinterpretation of postwar Japan's policies towards immigrants and foreign residents. Drawing on a wealth of historical material, Tessa Morris-Suzuki shows how the Cold War played a decisive role in shaping Japan's migration controls. She explores the little-known world of the thousands of Korean 'boat people' who entered Japan in the immediate postwar period, focuses attention on the US military service people and their families and employees, and also takes readers behind the walls of Japan's notorious Omura migrant detention centre, and into the lives of Koreans who opted to leave Japan in search of a better future in communist North Korea. This book offers a fascinating contrast to traditional images of postwar Japan and sheds new light on the origins and the dilemmas of migration policy in twenty-first century Japan. Yuma Totani, The Tokyo War Crimes Trial: The Pursuit of Justice in the Wake of World War II (Harvard, 2009).

This book assesses the historical significance of the International Military Tribunal for the Far East (IMTFE)—commonly called the Tokyo trial—established as the eastern counterpart of the Nuremberg trial in the immediate aftermath of World War II.

Through extensive research in Japanese, American, Australian, and Indian archives, Yuma Totani taps into a large body of previously underexamined sources to explore some of the central misunderstandings and historiographical distortions that have persisted to the present day. Foregrounding these voluminous records, Totani disputes the notion that the trial was an exercise in “victors’ justice” in which the legal process was egregiously compromised for political and ideological reasons; rather, the author details the achievements of the Allied prosecution teams in documenting war crimes and establishing the responsibility of the accused parties to show how the IMTFE represented a sound application of the legal principles established at Nuremberg.

Legal Imperialism examines the important role of nineteenth-century Western extraterritorial courts in non-Western states. These courts, created as a separate legal system for Western expatriates living in Asian and Islamic countries, developed from the British imperial model, which was founded on ideals of legal positivism. Based on a cross-cultural comparison of the emergence, function, and abolition of these court systems in Japan, the Ottoman Empire, and China, Turan Kayaoglu elaborates a theory of extraterritoriality, comparing the nineteenth-century British example with the post-World War II American legal imperialism. Ultimately, his research provides an innovative basis for understanding the assertion of legal authority by Western powers on foreign soil and the influence of such assertion on ideas about sovereignty.

Shigenori Matsui, The Constitution of Japan: A Contextual Analysis (Hart, 2011).

With almost 2,000 years of history, Japan boasts the second largest economy in the world. Yet, its first modern constitution - the Meiji Constitution - was not enacted until comparatively recently, in1889. Following World War II, Japan adopted and ratified its current Constitution, the Japanese Constitution of 1946. This book - part of the Constitutional Systems of the World series by Hart Publishing, Oxford - is designed to explain the outline of Japan's Constitution together with a number of its unique characteristics, and offers the historical background and context which help explain its significance. Major topics covered include the constitutional history of Japan, fundamental principles of the Constitution, the people and the Emperor, the Diet and legislative power, the Cabinet and executive power, and the Judiciary and judicial power. Also discussed are the protection of fundamental human rights, individual rights (including freedom of expression), economic freedoms, social rights, democratic and procedural rights, pacifism, and national defense. Although the Japanese Constitution was enacted under the strong influence of the US Constitution, many of its features are very different, for example: the existence of an Emperor, the long dominance of the Conservative party over the government, the relatively strong power of government bureaucrats, the absence of a leadership role in the Prime Minister, the small role the judiciary play in solving constitutional disputes, and the struggle over national defense. Written in an accessible style and comprehensive in content, the reader will find this account of the constitutional law of Japan both unique and stimulating.

Employing a rational-choice approach, Professor Ramseyer studies the impact of Japanese law on economic growth in Japan. Toward that end, the author investigates the way law governed various markets and the way that people negotiated contracts within those markets. For much of the period at stake, the Japanese government was an oligarchy rather than a democracy; the judges operated a civil rather than common law regime; the economy grew modestly but erratically; and social customs changed rapidly and radically. As a result, this study applies an economic logic, but to markets in a vastly different world, in a different historical period, and with a different political regime and legal system. Findings reveal that the legal system generally promoted mutually advantageous deals, and that people generally negotiated in ways that shrewdly promoted their private best interests. Whether in the markets for indentured servants, prostitutes, or marriage partners, Odd Markets in Japanese History reports little evidence of either age- or gender- related exploitation.

This last one's not as recent and not as historical, but I think you all might enjoy it: Eric Feldman, "The Tuna Court: Law and Norms in the World's Premier Fish Market," California Law Review 94 (2006).

Legal scholars have long emphasized the corrosive impact of conflict on long-term commercial and interpersonal relationships. To minimize the negative consequences of such conflict, members of close-knit groups who anticipate future interactions create ways to resolve their disputes using internal group norms rather than state-enforced legal rules. From farmers in California's Shasta County to jewelers in midtown Manhattan, the literature describes people who create informal norms of conflict management that are faster and less expensive than formal law and that lessen the harm that conflict causes to their relationships.

This Article tells a different story. It describes a tightly organized group of commercial traders - tuna merchants in Tokyo - who are repeat players in a discrete marketplace where there are regular problems with the quality of auctioned goods. Rather than ignoring those problems or quietly resolving them with reference to informal market norms, Tokyo's tuna merchants make use of a highly specialized court created by the state - the Tuna Court - that follows formal rules and procedures that are contained in a government ordinance. The supposed disadvantages of legal rules are nowhere apparent. The Tuna Court is fast and inexpensive, and the process of articulating and resolving claims serves to strengthen individual relations and the cohesion of the market community. A comparison between Japan and the United States demonstrates that there is more disputing and more legal formality in the Japanese tuna market, and this Article credits a mix of economic and cultural factors for the difference. In short, by presenting a detailed case study of a highly specialized court that operates under government auspices, this Article argues that formal state law can outperform informal group norms by satisfying the business needs of close-knit merchants while simultaneously contributing to the shared values that underlie the success of their future transactions.