Wolfe on Rodgers, Age of Fracture, Maier on Jasanoff, Liberty's Exiles, and more in the book pages

What shaped the second half of the 20th century? "Rather than a shift from left to right," Alan Wolfe writes in a review of The Age of Fracture by Daniel T. Rodgers, in The Book (New Republic), 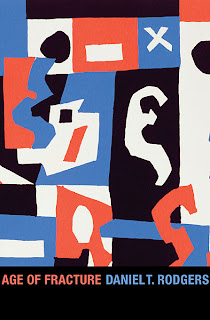 we have witnessed, according to Rodgers, a transformation from big to small. The intellectuals who shaped America’s understanding of itself fifty years ago—Schlesinger himself, and David Riesman, C. Wright Mills, and the late Daniel Bell—were, for all their faults, familiar with history, preoccupied with power, and appreciative of complexity....No wonder that the leaders who followed them were so ambitious: whether it involved deploying American military might abroad or sponsoring social reform at home, presidents as politically distinct as Johnson and Nixon were hardly shy about using the power of the state to achieve their ends.

All this changed over the course of subsequent decades, in large part because thinkers stopped thinking big. Economics is exemplary. It was not so much that Keynes lost ground to Hayek—both, after all, were European idea men shaped by the events of their tragic century. It was instead that the micro usurped the macro. The key figure in this regard is a relatively obscure University of Chicago law professor named Ronald Coase, who in 1960 urged judges not to focus on abstract questions of justice but to decide cases based upon overall economic benefit.

President Ronald Reagan is an example of the turn to smallness, "and not just because his economic policies so strongly favored the market." Early in his presidency, Reagan seemed attracted by big ideas such as battling the "evil empire" of the Soviet Union. But, Wolfe writes, "by his second term...darkness at noon had become sunshine 24/7....Cold War Reagan had become have-a-nice-day Reagan....When George W. Bush managed to link his call for a war against terror with the reassurance that no sacrifices would be necessary to fight it, he had precedent aplenty in the speeches of a president who saw 'no need for overcoming, no manacles to be broken, no trial to be endured, no pause in the face of higher law.'"

But the turn from big to small was broader, and historians were in the mix, as they "focused on the conditions of everyday life, eventually leaving the stuff of high statecraft behind."  Smallness on the left as well as the right, Wolfe argues "is ugly, and small is now everywhere around us."  Wolfe has more to say about this important book here.

LIBERTY'S EXILES: American Loyalists in the Revolutionary World by Maya Jasanoff is reviewed in the Washington Post. Pauline Maier writes that this "ambitious, empathetic and sometimes lyrical book" 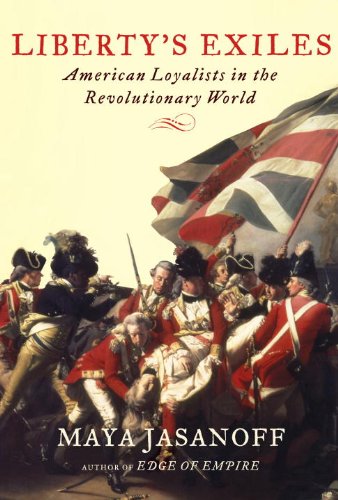 tells the story of the loyalist exiles of the American Revolution - the 60,000 people who fled the 13 colonies of North America after their countrymen declared their independence, founded a republic and successfully defended their revolution in a war that set friends, neighbors and family members against one another. Those stalwart defenders of British rule eventually dispersed into far-flung parts of the world. Although other historians have studied the loyalists and parts of their widespread migration, "Liberty's Exiles" justly claims to be "the first global history of the loyalist diaspora."

After the war, when the British offered loyalists land and free passage to other parts of its empire, "Jasanoff describes in emotionally wrenching detail" the "massive evacuation of both soldiers and civilians." Maier writes that the author "skillfully threads the stories of individual loyalists through her narrative as she beautifully describes, one by one, the often inhospitable places they went."  Read the rest here.

Also reviewed this week, The Rise and Fall of Ancient Egypt by Toby Wilkinson in the Los Angeles Times; ROMANOV RICHES: Russian Writers and Artists Under the Tsars by Solomon Volkov in the Boston Globe; and THE EXECUTIVE UNBOUND: After the Madisonian Republic by Eric A. Posner and Adrian Vermeule in the New York Times.
Posted by Mary L. Dudziak at 11:33 AM