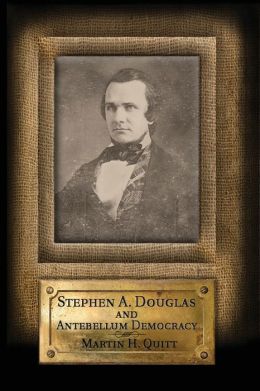 “Judge” and Illinois Senator Stephen A. Douglas (the former his proudly preferred title) was a major player in the constitutional debates leading up to the Civil War, though ever since he has dwelt, in historian Martin Quitt’s description, “in Lincoln’s shadow” (p.169). This, Quitt reminds us, was a stunning reversal. From his mid-twenties on, it was Douglas, not Lincoln, who was considered the political star, destined ultimately for the White House. It was a coup for the relatively obscure Lincoln – a one-term Whig Congressman – to get the famed Judge Douglas to join him for a series of debates during their 1858 contest for the U.S. Senate seat from Illinois which, electorally, Douglas won, and Lincoln lost. Those brilliant debates – critical texts of American constitutional theory – marked the beginning of the reversal of the friendly antagonists’ political (and constitutional) fortunes. From Appomattox Courthouse on, we have lived in Lincoln’s world, not Douglas’s. While there’s no suggestion that Quitt would want it otherwise, he plainly feels that something has been lost in Douglas’s historical eclipse. In that sense, at least, he seeks to redeem Douglas’s political and constitutional thought – as well as Douglas’s personal reputation.

Read the full review here, at the Law & Politics Book Review. An excerpt of the book is available here, at the CUP website.
Posted by Karen Tani at 12:30 AM