Balkin on Barnett's "Our Republican Constitution" 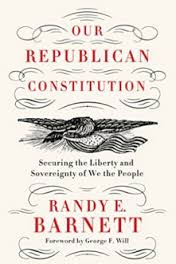 Randy Barnett argues that the American political tradition, understood in its best light, features a "Republican Constitution." But Barnett's version of "republicanism" has relatively little to do with the historical tradition of republicanism, a tradition that celebrates the common good; seeks to inculcate civic virtue; opposes aristocracy, oligarchy, and corruption; understands liberty not as mere negative freedom but as non-domination; connects civil rights to civic duties; and demands a government which derives its powers from and is ultimately responsive to the great body of the people.

Instead, Barnett's "Republican Constitution" is far closer to what most historians of the Founding would regard as the opposite or complement of the republican tradition. This is the tradition of natural rights liberalism, which begins with John Locke and evolves into classical liberalism in the nineteenth century. This tradition celebrates individual autonomy, views the state as organized to protect the natural rights of individuals, fears the tyranny of majorities, and treats liberty as a negative freedom — a protected space in which individuals, free from state control, may accumulate property and pursue happiness.

Although Barnett identifies his "Republican Constitution" with the Founders, it is really a sympathetic restatement of late nineteenth-century classical liberalism, which combined dual federalism with police powers jurisprudence. Conversely, his constructed foil, which he calls the "Democratic Constitution," is really a version of early twentieth-century progressivism which arises in opposition to the Gilded Age. Barnett's imagined opposition between "Republican" and "Democratic" visions of the Constitution at the Founding is really an idealized version of the struggle between classical liberalism and progressivism at the beginning of the twentieth century. This is an important clash of values, and it had momentous consequences for the way we understand constitutional law today. But it is not an adequate account of Founding-era thought.

By taking the word "republican" and pasting it onto the classical liberal tradition, Barnett has buried a truly important tradition in American constitutional thought — the actual historical republican tradition. This tradition is especially relevant today. Our contemporary politics is full of anxieties about republican themes: corruption, oligarchy, self-dealing, and lack of devotion to the public good. Barnett's classical liberalism is too thin to meet these contemporary concerns. By insisting that the central if not sole purpose of government is to protect natural rights — including, most prominently, the right to acquire and accumulate property — his account seems to talk past what concerns many people today about our political and constitutional system, not only on the left, but also on the right. It actually disables us from focusing on the important connections between democracy and political economy that the historical theory of republicanism was centrally concerned with.

The American constitutional tradition, understood in its best sense, has always drawn on elements of both the republican and liberal traditions, and applied them to the problems and circumstances of the age. It has employed the best parts of each tradition to critique and transcend the blindnesses and limitations of the other. That is as true of the founding period as it is of the present. No reconstruction of the American constitutional tradition can afford to discard one-half of this dialectic.

Randy Barnett's search for the "Lost Constitution" apparently has uncovered his own version: "Our Republican Constitution." Just in time for Trump or Cruz?