To Michael B. Katz, In Memoriam (Tani, States of Dependency, Post 1)

Back in 2010, when I was a lowly graduate student trying to figure out what I had to contribute, I closed my guest blogging stint here at LHB with a post on gratitude. As I begin a series of posts on my just-published book, I’d like to begin the same way. I have by now accumulated many debts – so many that my formal Acknowledgments section is surely inadequate and under-inclusive.

But I will always remember this big one: the debt I owe to one of dissertation advisors, Michael B. Katz. He succumbed to cancer in August, 2014, after a long career at the University of Pennsylvania. By then he had taught hundreds of students and written dozens of important books and articles, ranging from landmark overviews of the American welfare state to moving meditations on urban transformation and place-based inequality. (Here he is talking about One Nation Divisible; here's a link to a must-read short piece, "The Death of 'Shorty.'") My highest aspiration for my book is that it would have made him proud. So, before I post anything more about that, I want you to know about Michael Katz, to whom the book is dedicated.

I should mention first the beautiful and inspiring tributes to Michael that others have written. Mike Rose wrote about the extraordinary feedback that Michael gave to colleagues and students. “He was tough-minded and didn’t hold back, though he provided the hard news in a way that made your writing better. And when you got praise—and he was generous with praise—well, you could take it to the bank, for Michael was not a bullshitter.” Tom Sugrue, Michael's longtime colleague and collaborator, wrote admiringly about Michael’s “fierce intellect, his perseverance, [and] his generosity.” He also described Michael’s “commitment, against the odds, to make the world a just place.” Over at the U.S. Intellectual History Blog, Robert Greene II pinpointed perhaps the most tragic aspect of Michael’s untimely passing: that “we won’t have the opportunity to hear even more from him in such a critical time in our nation’s history.”

In the fall of 2014, at a conference organized in his honor at the University of Pennsylvania, I heard many more tributes – from Alice O’Connor, Ira Katznelson, William Julius Wilson, and others. They praised Michael’s work for its combination of rigor and passion – for drawing on deep archival research to confront pressing contemporary questions.  At a memorial service the following day, I heard family and close friends describe Michael’s humane approach to life. Michael could be a harsh judge when writing about past actors, but in his day-to-day dealings, he was kind, generous, and empathetic.

All of this is true to my experience. All of these qualities inspire my deep and abiding gratitude to him. I am most thankful, though, for a different quality: Michael inspired his students to be courageous with their knowledge – to recognize the value of their own research and ideas, and to put it out in the world.

Here’s an example of what I mean: I remember that in graduate seminars, Michael would often ask hard questions, hear silence, and then just wait … and wait … for as long as it took. That awkward pause that everyone else seems to find unbearable – Michael endured it calmly and patiently, refusing to fill the space with his own formidable knowledge. Eventually, a student would speak up. Sometimes that student was me.

Moments like that helped transform me from someone who often felt like a grad-school impostor to someone capable of writing a dissertation, teaching a class, and speaking articulately about my own values and commitments. I’m sure that Michael knew what he was doing when he let those silences stretch on and on. He wasn’t trying to make us uncomfortable. He was giving us permission to step up and become the scholars and experts he knew we could be. 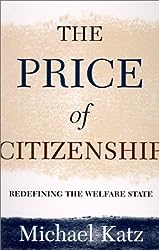 Michael was like that at every stage of graduate school, perhaps most of all in those difficult “all but dissertation“ (ABD) years, when students tend to feel lost, discouraged, and unconfident. I remember many a conversation in which, in the course of seemingly idle chit-chat, he would tell me about what his recent former graduate students were doing. He was always so proud – not of their titles or positions, but of their research agendas. He thought they were asking great questions, about issues that mattered: poverty, inequality, education, immigration, urban governance. And he was so excited by their findings. (“Tremendously important” is a phrase he used a lot.) I left our conversations feeling that even if I didn’t have it all figured out, I was spending my time on something worthwhile.

One final point about Michael: He had a wonderful laugh—heaving, mirthful, quintessentially nerdy. Anyone who knows him will recall it. Sometime he laughed at irony. (I’m sure he would have found humor in our current presidential election.) But there was nothing despondent or dark about his worldview. I want to end with this warm memory because Michael’s own writing tended to end this way – not necessarily happily, but with the sense that it was possible to learn from history and do better in the future. I thought about this last year, when a reader of an early draft of my book manuscript told me that the book left her with a bleak feeling. I immediately began revising my Conclusion. In truth, I find it hard to write about the history of public welfare in a way that suggests optimism about the future. But I felt that I owed it Michael to try, and I hope that I succeeded.

So – here’s to Michael B. Katz, a brilliant scholar, an extraordinary teacher and mentor, a loving husband to Edda and father to Sarah, Paul, and Rebecca, and a wonderful human being. May his memory continue to inspire us to do good work and to be decent people.

Thank you for taking the time to read this post and for giving me a chance to honor his memory.

[This is the first in a series of posts about States of Dependency, a history of social welfare law and administration between the New Deal and the modern welfare rights movement]
Posted by Karen Tani at 12:30 AM