A British historian takes on the U.S., Kazin takes aim at presidential histories, and more in the book reviews

"Americans have quaint delusions that they are anti-imperialist, though they created on their own continent the greatest empire in history," begins Max Hastings, in a review of America, Empire of Liberty: A New History by Cambridge University historian David Reyn 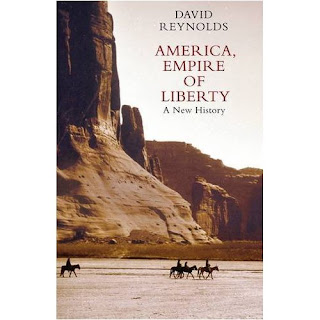 olds in the London Times. "America created an empire," Hastings writes, "mostly by war: against France, Spain, Britain, Mexico and above all the wretched 'Indians' that the white newcomers dispossessed." He concludes:

The author stands beside Simon Schama as a populariser of history whose work also represents the widest knowledge and highest scholarship. This is the best single-volume account of the world's greatest society for many years. Even those of us who think we know America well are reminded anew what an awesome place it is, even if its record is a trifle less noble than its citizens like to think.

Alan Marshall also applauds the book in The Telegraph, noting that the work is being serialized on the BBC. However, DD Guttenplan, writing for The Guardian, finds the book "unrealiable," and thinks that "Reynolds is just cloth-eared when it comes to American culture."
Michael Kazin takes up THE SOUL OF A LEADER: Character, Conviction, and Ten Lessons in Political Greatness by Waller R. Newell and BAPTISM BY FIRE: Eight Presidents Who Took Office in Times of Crisis by Mark K. Updegrove in the Washington Post. "For most Americans," Kazin writes, "the history of the nation's politics means the lives of its presidents. Academic historians deplore that viewpoint and the hefty book sales that acc

ompany it; to explain past presidents, scholars insist, one must appreciate the context in which they campaigned and governed." Still, "a fascination with the 43 individuals who have held the big job is hardly naive....Presidential historians like Robert Dallek and William E. Leuchtenburg, who weave together the personal and the political, the man and his era, can illuminate the workings of power at the highest level, as well as the severe limits of what that power can accomplish." This is not the case, Kazin concludes, with the books featured in this weekend's review, which Kazin places among the category of unsatisfying presidential histories.

Unfortunately, any thriving market generates its share of shoddy goods. Far too many presidential histories fail in one of two familiar ways, both reminiscent of undergraduate term papers dashed off the night before a due date. Their authors either indulge in large but banal ideas about leadership that bound heedlessly across the centuries, or they rehash biographical details familiar to anyone who's read a history textbook or seen the documentaries that certain cable channels run with the frequency of ads for body-building equipment.

Newell's book "illustrates the first kind of failure," while

Updegrove's "is unsullied by big ideas of any kind."
Lincoln books are a feature in the run-up to Lincoln's bicentennial February 12. The Boston Globe has received 60 new Lincoln books! Today the paper takes up A. LINCOLN: A Biography by Ronald C. White Jr.; LINCOLN: The Biography of a Writer by Fred Kaplan; and MRS. LINCOLN: A Life by Catherine Clinton.
A World of Trouble: The White House and the Middle East - From the Cold War to the War on Terror by Patrick Tyler gets a brief note in the San Francisco Chronicle. INSIDE THE STALIN ARCHIVES: Discovering the New Russia by Jonathan Brent is reviewed in the New York Times, as is THE INVENTION OF AIR: A Story of Science, Faith, Revolution, and the Birth of America by Steven Johnson. Reviewed in the Boston Globe: SAMUEL ADAMS A Life, by Ira Stoll.
Posted by Mary L. Dudziak at 9:23 AM