As part of its Founders' Day Celebration, the Washington College of Law at American University in Washington, D.C., announces the conference The Role of Presidential Leadership in Advancing Civil Rights. According to the announcement, 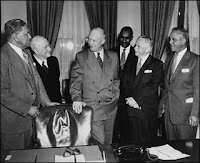 This program . . . will bring together leading historians, political scientists, and law professors for an interdisciplinary conversation about the role of presidents in advancing the civil rights agenda during the 20th century. Presenters will include award‐winning scholars who have written books on presidents from Roosevelt to Bush II.

The conference's organizers and moderators are Lynda Dodd and Robert L. Tsai. Speakers include:

There is no charge for registration, but registration is required and can be completed here.
Posted by Dan Ernst at 12:20 AM