Clayborne Carson, Professor of History and founding Director of the Martin Luther King, Jr., Research and Education Institute at Stanford University will spea 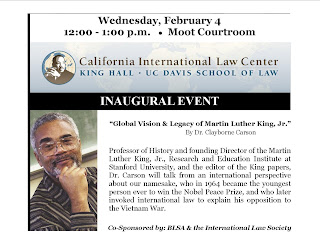 k on "The Global Vision and Legacy of Martin Luther King, Jr." at the launch of the new California International Law Center at UC Davis School of Law. Diane Amann, founder of the IntLawGrrls blog, is Director of the new Center. The event will take place from 12-1 pm in King Hall's Wilkins Moot Courtroom on the UC Davis campus.
At a time of retrenchment in higher education, it is nice to hear news of a law school building a new program. As for the Martin Luther King connection, the law school's building, according to the announcement, "was dedicated to memory of the slain civil rights leader on April 12, 1969." King was killed in April 1968. Davis Dean Kevin Johnson explains: "As we mark our fortieth anniversary at King Hall, the inauguration of the California International Law Center offers us a perfect opportunity to rededicate ourselves to the legacy of Dr. King, who did so much to promote justice and equality not only in the United States but around the world."
More details are here. Carson, editor of the King papers at Stanford, is the author of the civil rights history classic In Struggle: SNCC and the Black Awakening of the 1960s (1981), and other works. His address will be posted on the UC Davis School of Law website.
Posted by Mary L. Dudziak at 2:00 PM