Gilder Lehrman Gets Its Lincoln On 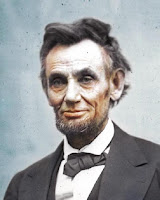 Appropriately in advance of the bicentennial of Abraham Lincoln's birth, the Gilder Lehrman Institute of American History has posted four talks given last November at the symposium "Abraham Lincoln in His Time and Ours":

Professor Manisha Sinha provides insight into the role of both black and white abolitionists on President Lincoln’s evolving position on emancipation and black rights. Sinha shows how Lincoln’s willingness to meet with and listen to the views of African Americans influenced his decision to reject colonization and embrace emancipation—and ultimately to support the call to extend political citizenship to African Americans. Sinha is associate professor of Afro-American studies and history at the University of Massachusetts, Amherst.

Professor James Oakes clarifies Lincoln’s views on race through a careful look at the various and competing definitions of “rights.” Oakes argues that Lincoln did not believe black men and women could or should be denied their natural rights, but that his acceptance of states’ rights allowed him to avoid the question of extending political citizenship rights to African Americans. Oakes is Graduate Humanities Professor and Professor of History at the Graduate Center, City University of New York. He is the author of The Radical and the Republican: Frederick Douglass, Abraham Lincoln, and the Triumph of Antislavery Politics (2007), winner of the Lincoln Prize.

Professor Sean Wilentz traces the surprising connection between Andrew Jackson and Abraham Lincoln, and reminds us that Lincoln was willing to look for political wisdom and political strategies within his own party as well as in the rival Democratic Party. Wilentz is the Sidney and Ruth Lapidus Professor in the American Revolutionary Era at Princeton University. He is the author and editor of numerous books, including The Rise of American Democracy: Jefferson to Lincoln (2005), which was awarded the Bancroft Prize.

Professor Richard Carwadine examines Lincoln’s religious beliefs as America’s crisis deepened, and looks at the role that the President’s religious sentiments played in mobilizing support for the war among Union citizens. Richard Carwardine is Rhodes Professor of American history at the University of Oxford. He is the author of Lincoln: A Life of Purpose and Power (2003), which won the Lincoln Prize in 2004.