Lovell on Rights Talk before the Rights Revolution

Recently published by the University of Chicago Press is the political scientist George I. Lovell’s This Is Not Civil Rights: Discovering Rights Talk in 1939 America. The Press explains: 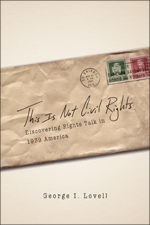 Since at least the time of Tocqueville, observers have noted that Americans draw on the language of rights when expressing dissatisfaction with political and social conditions. As the United States confronts a complicated set of twenty-first-century problems, that tradition continues, with Americans invoking symbolic events of the founding era to frame calls for change. Most observers have been critical of such “rights talk.” Scholars on the left worry that it limits the range of political demands to those that can be articulated as legally recognized rights, while conservatives fear that it creates unrealistic expectations of entitlement.

Drawing on a remarkable cache of Depression-era complaint letters written by ordinary Americans to the Justice Department, George I. Lovell challenges these common claims. Although the letters were written prior to the emergence of the modern civil rights movement—which most people assume is the origin of rights talk—many contain novel legal arguments, including expansive demands for new entitlements that went beyond what authorities had regarded as legitimate or required by law. Lovell demonstrates that rights talk is more malleable and less constraining than is generally believed. Americans, he shows, are capable of deploying idealized legal claims as a rhetorical tool for expressing their aspirations for a more just society while retaining a realistic understanding that the law often falls short of its own ideals.


George I. Lovell has written a fascinating, important, and page-turning account of how ordinary people in American history have insisted that government take into account and respond to their vision of what constitutes fundamental rights. This is both an instant classic in law and society and a vital resource for proponents of popular constitutionalism.