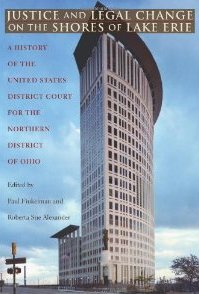 In 1969, the Cuyahoga River burned. Although it was not the first time that the River was in need of assistance, it was the 1969 fire that helped to compel a radical transformation in the way that we interact with the environment. The U.S. District Court for the Northern District of Ohio was not called upon to adjudicate the liabilities resulting from this pivotal event. But in the years preceding the Cuyahoga fire, the district court was asked to navigate conflicting jurisprudential approaches to the use of land, air, and water. This chapter explores a handful of these cases in order to illustrate the nation's struggle over suspicious conceptions of economic advantage and fairness, flexible distinctions of private and public property, and evolving ideas of nature and health. The chapter begins with the 1924 decision in Ambler Realty Corporation v. Village of Euclid, which remains the most famous challenge to the constitutionality of zoning regulations. It then turns to the 1930 decision in Swetland v. Curtiss Airports Corporation, where the district court addressed the inevitable limitations in property rights above land following the advancement of powered human flight. Finally, it considers an opinion released on the eve of the Cuyahoga River fire, when the court was asked to choose between saving a town and protecting railroad operations in Biechelle v. Norfolk Western Railway Company. Although the district court's decisions in these controversies do not bear the indelible character that we often attribute to law, the federal district courts for the Northern District of Ohio contributed to a legal framework in which the fire could occur and, perhaps more significantly, in which the fire could be perceived as an important event.

Akron Law hosted a book launch/CLE seminar for Justice and Legal Change last month. The TOC and Paul Finkelman's introduction are here.  Professor Finkelman also contributed a chapter on the Oberlin-Wellington Fugitive Slave Rescue Case, Melvyn Dubofsky contributed one on labor injunction cases from 1870 to 1932, and Melvyn Urofsky contributed one on the trial of Eugene Debs in 1918.
Posted by Dan Ernst at 12:30 AM