The Idea of World Government, Why Publishers Love Lincoln, and More: This Week in the Book Pages 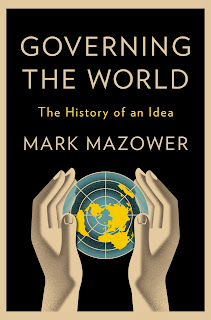 This week in the Wall Street Journal, Yascha Mounk reviews Mark Mazower's Governing the World: The History of an Idea (Penguin).  Mounk writes:


Mr. Mazower's intellectual history of world government is highly compelling. But his book's greatest merit is the author's treatment of the practical realities of the U.N. He gives clear-minded attention to a crucial, oft-neglected question: What real impact have international organizations had on the world? His answer implicitly challenges both the realist and liberal camps in international relations.

Also in the WSJ, a review of Timothy Egan's Short Nights of the Shadow Catcher: The Epic Life and Immortal Photographs of Edward Curtis (Houghton Mifflin Harcourt), and a review of Eric Jay Dolin's When America First Met China: An Exotic History of Tea, Drugs, and Money in the Age of Sail (Liveright).

The Wall Street Journal also has an interesting piece on the many books on President Lincoln, and why he is a favorite of publishers.  Here's a sample:


What is it about Abraham Lincoln? Publishers say he possesses a perfect confluence of salable qualities, reaching both Civil War buffs and those interested in general military history. Readers of historical biography are also crazy about him, because he led the country through what many believe was its most decisive moment. He even attracts those who don't usually read biographies because he embodies the enduring belief that any American, no matter his or her background, can reach the highest echelons of power.

You can read on here.  And for more on Lincoln, as Karen noted earlier this week, The New York Times has another review of John Fabian Witt's Lincoln's Code: The Laws of War in American History (Free Press).

In the Washington Post this week, you can find reviews of three of the National Book Awards nonfiction finalists: Robert A. Caro, The Years of Lyndon Johnson: The Passage of Power (Knopf) (here), Anthony Shadid's, House of Stone: A Memoir of Home, Family, and a Lost Middle East (Houghton Mifflin Harcourt) (here), and Katherine Boo's Behind the Beautiful Forevers: Life, Death, and Hope in a Mumbai Slum (Random House) (here).

Other reviews this week include a review of John Kelly's The Graves Are Walking: The Great Famine and the Saga of the Irish People (Henry Holt), and a review of Andy Greenberg's This Machine Kills Secrets: How Wikileakers, Cypherpunks, and Hacktivists Aim to Free the World's Information (Dutton), both in the New York Times,

Happy reading!
Posted by Clara Altman at 5:00 AM