Hasegawa on Crime & Punishment in the Russian Revolution

Tsuyoshi Hasegawa, UC Santa Barbara, has published Crime and Punishment in the Russian Revolution: Mob Justice and Police in Petrograd with Harvard University Press. From the publisher: 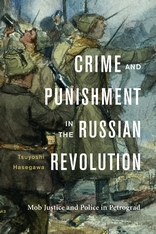 Russians from all walks of life poured into the streets of the imperial capital after the February Revolution of 1917, joyously celebrating the end of Tsar Nicholas II’s monarchy. One year later, with Lenin’s Bolsheviks now in power, Petrograd’s deserted streets presented a very different scene. No celebrations marked the Revolution’s anniversary. Amid widespread civil strife and lawlessness, a fearful citizenry stayed out of sight.

In Crime and Punishment in the Russian Revolution, Tsuyoshi Hasegawa offers a new perspective on Russia’s revolutionary year through the lens of violent crime and its devastating effect on ordinary people. When the Provisional Government assumed power after Nicholas II’s abdication, it set about instituting liberal reforms, including eliminating the tsar’s regular police. But dissolving this much-hated yet efficient police force and replacing it with a new municipal police led rapidly to the breakdown of order and services. Amid the chaos, crime flourished. Gangs of criminals, deserters, and hooligans brazenly roamed the streets. Mass prison escapes became common. And vigilantism spread widely as ordinary citizens felt compelled to take the law into their own hands, often meting out mob justice on suspected wrongdoers.

The Bolsheviks swept into power in the October Revolution but had no practical plans to reestablish order. As crime continued to escalate and violent alcohol riots almost drowned the revolutionary regime, they redefined it as “counterrevolutionary activity,” to be dealt with by the secret police, whose harshly repressive, extralegal means of enforcement helped pave the way for a Communist dictatorship.

“Hasegawa is one of our leading historians of the February Revolution… [He] makes a strong case that the catastrophic social breakdown, most especially the violent crime that pervaded life in Petrograd after the collapse of the monarchy, ‘served as a stepping-stone toward the creation of the pervasive instrument of terror that became an integral part of the Communist dictatorship.’” -Joshua Rubenstein

“This book makes a fundamental contribution to our understanding of the Russian Revolution by revealing the violent, chaotic lived experience of the revolution in the capital city. In a narrative full of colorful characters and stories, Hasegawa gives us a street-level view of the collapse of state authority that cleared the way for the Bolshevik seizure of power.” -Eric Lohr
“Hasegawa addresses the very important, largely ignored thus far, role of crime and the breakdown of social order and public safety. In doing so he changes the way we think and write about the Russian Revolution, making this one of the more original things I have seen in a very long time.” -Rex Wade
Further information is available here.
Posted by Mitra Sharafi at 7:00 AM