Nolan on the Fatal Accidents Act

Donal Nolan, University of Oxford Faculty of Law, has posted The Fatal Accidents Act 1846, which appeared in Tort Law and the Legislature, TT Arvind and Jenny Steele ed. (Hart 2012), 131-157: 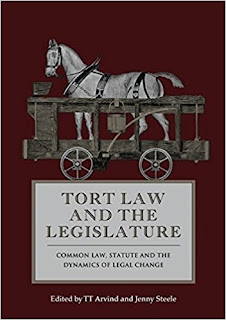 This chapter is a historical analysis of the Fatal Accidents Act 1846, which for the first time gave the relatives of a person who had been wrongfully killed a right to compensation from the wrongdoer. I argue that criticisms of the 1846 Act are largely groundless, and that giving the relatives of the deceased claims in tort was a pragmatic and rational response to the problem of wrongful death in the mid-nineteenth century. Furthermore, I argue that from the standpoint of legal analysis, the formula for recovery employed in the legislation was appropriate and effective, and that the legislation was a progressive measure, which had beneficial social effects. It is shown that the immediate catalyst for the legislation was the desire to protect the interests of the families of those who perished in mining accidents, and more generally it is argued that the passage of the Act was motivated by the humanitarian desire to reduce the incidence of fatal accidents and to make provision for those affected by them when they did occur. I conclude that the advent of the wrongful death action was an important and welcome development in the law of tort, which was appropriately brought about through legislative intervention.