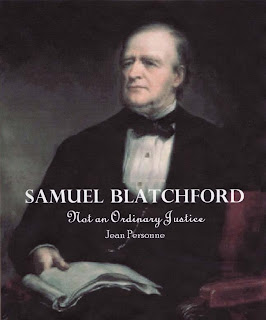 by the book. Largely thought the domain of legal toadies who championed laissez-faire at the behest of their former corporate clients and wide eyed populist radicals desperately hoping to prevent industrialization, immigration, and urbanization, the constitutional universe of the Gilded Age, thanks to such scholars as Charles McCurdy and Howard Gillman, has become a far more intriguing source of scholarly principle. Depending on one’s perspective, the justices on the Waite and Fuller Courts were committed to articulating the traditional constitutional animus against class legislation or, as Owen Fiss maintains, building the foundations of the civil rights revolution a half a century later.
Jean Personne’s Samuel Blachford: Not an Ordinary Justice will be of interest to all scholars interested in pre-Lochner revisionism. Personne, a long-time professor of history at the State University of New York, Baldwin, has devoted a career to the study of perhaps the most obscure justice on the post-Civil War Court with fascinating results. His study not only places Blachford at the center of the most important judicial debates of the Gilded Age, but casts new light on the constitutional politics of the late Waite and early Fuller Court. Blachford was the consummate note taker at the judicial conference and those papers, first unearthed by Personne’s investigation of the family summer home in Saranac Lake, New York, point to conflicts that would push the court in new directions in the next century.
The most important conflict concerned the place of religion in the United States. As scholars have recognized, the late nineteenth century was a time of Protestant revivalism and the Court in such cases as Reynolds v. United States reflected this sentiment by articulating a constitutional commitment to Christian values. Justice Blachford, who was married to a Jewish woman, vigorously protested judicial efforts to rest constitutional decisions on Christian doctrines. While ever the team player, Blachford elected not to write separately in Reynolds, Personne convincingly demonstrates that the Court’s greater sensitivity to religious issues after the turn of the century was in part the result of Blachford’s arguments in conference.
Blachford was a traditional economic conservative. His best known opinion, Chicago, Milwaukee & St. Paul Railway Co., pioneered the use of the due process clause to protect business enterprise. Unlike the other justices, however, Blachford had actual personal experience working on railroads, having been a conductor for two years after graduating Columbia college. Together with his lifelong friend, Elijah Doolittle, he actually invented a device for more accurate ticket taking that was used by a few railroads during the 1870s. This familiarity with the business practices of both trains and ships, Personne details, explains why Blachford tended to write majority opinions in admiralty and railroad cases.
Samuel Blachford is very much a nineteenth century biography. More facts than one could ever imagine, few general theories. Still, the story of Samuel Blachford as told by Jean Personne adds significantly to our understanding of judicial politics during the 1880s and 1890s. Personne demonstrates that the justices were human beings, as concerned with justice and law as religion and business. Perhaps most fascinating is Personne’s revealing that Blachford broke his arm in 1889, during a stampede caused by a person who falsely cried “anarchist” in a crowded theater. Blachford’s notes indicate that the incident was discussed by the justices on several occasions and may have provided the basis of Holmes’s more famous analogy in Schenck v. United States.
Posted by Mary L. Dudziak at 11:05 AM

Brown University Press does not seem to exist (http://www.brown.edu/Administration/News_Bureau/Databases/Encyclopedia/search.php?serial=B0550)
and your link to the Amazon page for this book leads to another publication. There is no SUNY Baldwin, and all searches for a "Professor Personne" have returned no results. Does this book (or author) actually exist? We'd like to order it for our library, but only if it's actually out there! Thanks.

I just noticed the date on this blog posting. I feel a bit silly, but perhaps not as silly as the Anglo-American Law selector for our library.