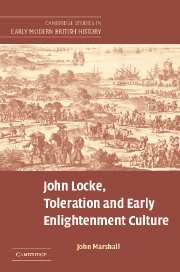 pendent on W. K. Jordan's four- volume The Development of Religious Toleration in England (1932-1940) and Peter Zagorin's recent How the Idea of Religious Toleration Came to the West (2003). But Jordan focuses on England, whereas Marshall-- rightly--sees toleration as a European phenomenon; and Zagorin ranges more widely from the sixteenth century to the eighteenth century, while Marshall seeks to pursue a more limited "moment" in the 1680s and 1690s. Certainly the second half of the seventeenth century was a high point of persecution which seems to have given way in a number of countries to toleration. It was also a period in which there were multiple persecutions and tolerations, depending on the moment. In England the Anglican state's persecution of Nonconformity in the Clarendon Code flipped over into the united Protestant resistance to Catholicism under James, followed by the Glorious Revolution and the Toleration Act. Persecutors and advocates of toleration were often one and the same. Charles II, whose tolerant Declaration of Breda raised such hope in 1660, advocated restricting the franchise to Anglicans when he was King, but also issued the short-lived Declaration of Indulgence in 1672, and died a Catholic. Similarly, James II was both an inflexible Catholic, intolerant of other religious views,and the author of the Declarations of Indulgence in 1687 and 1688; and Archbishop William Sancroft, who supported Anglican legislation against Dissent in the 1660s and 1670s, wooed Dissenters in 1688 to prevent the triumph of James II's Catholic policies. However insincerely, all three adopted the logic of toleration to pursue their own ends, suggesting perhaps that they recognized the internal inconsistencies of persecution.
John Marshall's ambitious and wide-ranging book sets itself a challenging task. Firstly, Marshall traces the impact of religious violence and considers representations of intolerance across France,Piedmont, the Netherlands, Ireland, and Britain. Marshall treats this intolerance as a backdrop to Locke's ideas of toleration, which justified resistance to rulers and extended rights to people--but only contingently. Marshall then considers the arguments for toleration, and shows the complexity of the multiple voices, some of which sought to justify intolerance as well as toleration. Above all those who advocated intolerance were preoccupied with heterodoxy and heresy and this impeded the growth of toleration, not just in religious matters but also in sexual mores and attitudes to those of other religions such as Muslim and Jews. By the 1680s and 1690s, however, Marshall claims that a small group of Ã©migrÃ©s [sic] in the Netherlands developed ideas of universal religious toleration, the group included Locke and conceived an "early Enlightenment culture" which was complementary to the republic of letters which emerged at the same time. This early Enlightenment culture was in opposition to the Inquisition and drew on Christianity of the first three centuries as a precedent of tolerant Christianity. But there were limits to this early Enlightenment culture of toleration. As the works of Pierre Bayle and Gilbert Burnet show, Protestant tolerance did not comprehend Catholicism, nor did it embrace atheism or sexual libertinism.
This brief summary of Marshall's argument does not capture the detail with which he clothes the discussion.
Continue reading here.
Posted by Mary L. Dudziak at 7:58 PM