Leading historian of the American west, Patricia Nelson Limerick, University of Colorado, reviews DRIVEN OUT: The Forgotten War Against Chinese Americans by Jean Pfaelzer in this Sunday's New York Times. "Thinking realistically about the history of the American West," Limerick writes, "easily lands on the list of this nation’s top 10 least favorite pastimes." She finds Pfaelzer's book a corrective. The book 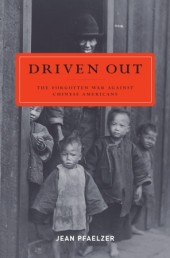 tells the story of the “thousands of Chinese people who were violently herded onto railroad cars, steamers or logging rafts, marched out of town or killed,” from the Pacific coast to the Rocky Mountains. Despite the forceful adjective of Pfaelzer’s subtitle, this burdensome history has not been entirely “forgotten.” Scholars have written comprehensively and memorably about it. But it is surely accurate to say that a majority of Americans live without a recognition of the degree, scale and extent of these chilling undertakings.

Most know even less about the extraordinary record of the Chinese people’s responding to persecution with boycotts, petitions, lawsuits and demands for reparations. In Wing Hing v. City of Eureka, 53 Chinese men and women joined together in asserting that the Northern California city had a duty to protect its residents and in demanding reparations and financial compensation for the violence that drove them out in 1885. Confronted with the requirement, in the Geary Act of 1892, that Chinese immigrants carry an identity card proving they were in the country legally or else face deportation, thousands refused to submit to what they called the “Dog Tag Law,” thus undertaking what Pfaelzer says was “perhaps the largest organized act of civil disobedience in the United States.”

Altogether, Chinese immigrants filed more than 7,000 lawsuits in the decade after the Chinese Exclusion Act of 1882, “and they won the vast majority of them,” Pfaelzer writes. In truth, these efforts to claim the protection of American law should require historians to come up with a whole new understanding — in geography, chronology and cast of characters — of the civil rights movement.

Along with Alexander Saxton, Pfaelzer sees "the disappointment and disillusion that afflicted many seekers of fortune in the American West," as a motivating factor behind anti-Chinese violence. But Pfaelzer recasts it: “Whites saw in Chinese workers precisely what they hated about their own lives: hard and underpaid work, long hours, poor living conditions and a dearth of women.”
Limerick's incisive review finds much insight in Pfaelzer's book, but points to weaknesses as well. It is often tiresome to hear penetrating scholarship criticized for lacking a narrative flair, but Limerick makes a connection between what she sees as flaws in the book's execution, and the author's message.

Uneven quality of the writing has consequence. It gives the reader an unintended relief from an otherwise unrelenting confrontation with human cruelty. One more round of revisions, with sharper phrasing, clearer narrative and more thorough analysis, and Pfaelzer could have sealed off the reader’s route of emotional escape.

It looks as if an important book has met its match with a world class reviewer. Read the review here, and buy the the book at your local independent bookstore, or here.
Posted by Mary L. Dudziak at 11:27 AM