Reviewed: Weiner, Legacy of Ashes: The History of the CIA

LEGACY OF ASHES: The History of the CIA, by Tim Weiner is reviewed today in the Washington Post , the Boston Globe, and the New York Times. Evan Thomas writes in the NY Times:
Tim Weiner’s engrossing, comprehensive “Legacy of Ashes” is a litany of failure, fr 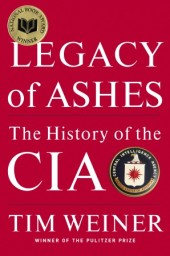 om the C.I.A.’s early days, when hundreds of agents were dropped behind the Iron Curtain to be killed or doubled (almost without exception), to more recent humiliations, like George Tenet’s now infamous “slam dunk” line. Over the years, the agency threw around a lot of money and adopted a certain swagger. “We went all over the world and we did what we wanted,” said Al Ulmer, the C.I.A.’s Far East division chief in the 1950s. “God, we had fun.” But even their successes turned out to be failures. In 1963, the C.I.A. backed a coup to install the Baath Party in Iraq. “We came to power on a C.I.A. train,” said Ali Saleh Saadi, the Baath Party interior minister. One of the train’s passengers, Weiner notes, was a young assassin named Saddam Hussein. Weiner quotes Donald Gregg, a former C.I.A. station chief in South Korea, later the national security adviser to Vice President George H. W. Bush: “The record in Europe was bad. The record in Asia was bad. The agency had a terrible record in its early days — a great reputation and a terrible record.”

And yet the myth of the C.I.A. as an all-knowing, all-powerful spy agency persisted for years, not just in the minds of America’s enemies but in the imagination of many American television-watchers and moviegoers. Among those fooled, at least initially, were most modern presidents of the United States. The promise of a secret intelligence organization that could not only spy on America’s enemies but also influence events abroad, by sleight of hand and at relatively low cost, was just too alluring.

When presidents finally faced the reality that the agency was bumbling, they could be bitter. Reviewing the C.I.A.’s record after his two terms in office, Dwight Eisenhower told the director, Allen Dulles, “I have suffered an eight-year defeat on this.” He would “leave a legacy of ashes” for his successor.
The full review is here.
Posted by Mary L. Dudziak at 9:39 AM

Èric and the Army of the Phoenix documents the truth and the personal consequences -and the politics at play- in the case of Èric Bertran, a boy from Lloret de Mar, a town some 75 km north of Barcelona (Catalonia). When he e-mailed a grocery chain to demand they label their products in Catalan, the language of Catalonia, 14-year-old Èric and his family were subjected to the midnight invasion of their home by thirty police officers bearing a search warrant from the Spanish government. The accusation: terrorism. A big fan of the "Harry Potter" series, Èric created a website that he called Army of the Phoenix, inspired by the famous J.K. Rowling stories, signing his e-mails with the name from his website. Even though they knew full well that the website belonged to a 14-year-old, from that point on, the Spanish authorities insisted on accusing Èric of being a member of an army of terrorists. His family has since taken legal action against the government of Spain for moral and psychological harassment of a minor, taking their case to the European Court of Human Rights in Strasburg and to the United Nations' International Court of Justice.

Èric Bertran and his brother Àdam tell their story in this documentary by Xevi Mató, with English subtitles by Heather Hayes. The film features statements by author Víctor Alexandre, who supervised the book about the case. Alexandre himself has also written an entertaining and controversial play about the incident, which débuted in Barcelona in 2007. Also featured in the film are contributions by Member of Parliament Joan Puig, who defended Èric before the Spanish assembly, and by Èric's attorney Emili Colmenero, who explains how the Spanish justice system connected a child to an Al Qaeda cell.