Erotica, Wikipedia, and the garden in the book reviews Publishing and Its Prosecution in Nineteenth-Century New York, this time from Michael Dirda in the Washington Post. He notes that Dennis, in part, "aims to reconstruct 'the meaning of obscenity' during that time and repeatedly shows how prohibitions 'promoted, as much as suppressed, the proliferation of sexual representations.'"

The history of Wikipedia is taken up in a Salon interview with Andrew Lih, author of The Wikipedia Revolution: How a Bunch of Nobodies Created the World's Greatest Encyclopedia. In the book, "Lih traces the advancement of all open-source software from the dimly lit halls of university philosophy departments to the cubicles of computer programming companies to the form it takes today."
But as the daffodils reign in my garden this morning, and the tulips wait their turn, it seems to be the time of the year for reviews of garden books. And when a legal historian cannot be found in the archives or in the middle of a manuscript, she can often be found tending a garden. 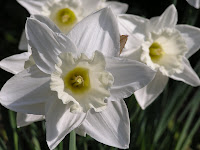 In Books & Culture, Gardening and Governing: Nature and culture among the roses by Alan Jacobs takes up Tim Richardson, The Arcadian Friends: Inventing the English Landscape Garden. Drawing upon references to gardening in Shakespeare's Richard II, Jacobs writes:

Gardening marks, as clearly as any activity, the joining of nature and culture. The gardener makes nothing, but rather gathers what God has made and shapes it into new and pleasing forms. The well-designed garden shows nature more clearly and beautifully than nature can show itself. And this can be a model of politics: people left to their own devices can run riot, make themselves and their environment "ruin'd" and "disorder'd"; properly governed, though, they can flourish, they can become their best selves and make the most of their environment.

But the governor's hand, like the gardener's, can fall too heavy. If we grant that Richard has been careless and thoughtless, has failed to govern, has allowed weeds to overwhelm "our sea-walled garden," we may also suspect this gardener, who is quick to appoint an "executioner" and is perhaps overly enamored with "evenness" in his realm. We need governors as we need gardeners; but not all forms of government are equally wise or equally beautiful.

Continue reading here.
Also in Books & Culture, Gardens: An Essay on the Human Condition by Robert Pogue Harrison and Heirloom: Notes from an Accidental Tomato Farmer by Tim Stark, are reviewed by Nate Jones.
Posted by Mary L. Dudziak at 10:05 AM