Three by Fineman on Feminism

This chapter, which will be included in Transcending the Boundaries of Law, M.A. Fineman, Ed (Routledge 2010) brings a historical and analytic gaze on the concept of equality in the US legal system. Beginning with the establishment of Portia Law School for women and court decisions like Muller v. Oregon, I discuss the tension between seeking equality as sameness of treatment and seeking positive improvements in the lives of women. While women have officially attained legal equality with men, in terms of being able to vote, practice a profession, and own property among other things, the benefits of citizenship are still distributed in highly unequal ways. In part this is because as a nation Americans value autonomy over equality and thus sacrifice substantive equality in the name of greater independence, ignoring the realities of our shared states of episodic dependency and constant vulnerability. 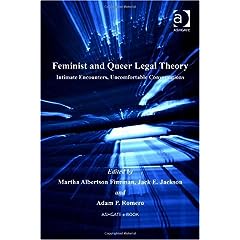 This chapter is in Feminist and Queer Legal Theory: Intimate Encounters, Uncomfortable Conversations, M.A. Fineman, J. E. Jackson, and A. P. Romero, Eds. (Ashgate 2009). It addresses the construction of the concept of the sexual family both outside of and inside law. The sexual family is the traditional or nuclear family, a unit with a heterosexual, formally celebrated union at its core. I use the term “sexual” to modify “family” to emphasize that our societal and legal images and expectations of family are tenaciously organized around a sexual affiliation between a man and woman. This is the primary intimate connection. Of course, it reflects the reproductive imperative, but this basic biological fact also has important ideological and legal ramifications. The sexual family is considered the “natural” form for the social and cultural organization of intimacy, its form ordained by divine prescription and perpetuated by opinion polls. The sexual family is an entity entitled to protection - granted “privacy” or immunity from substantial state supervision.

The reflection of the sexual family that is ensconced in law may be a distortion or a mere fragment of social reality, but that legal image constitutes the legal reality and forms the basis for state regulation. Because this legally constructed image expresses a vision of the appropriately constituted family, it defines the normal and designates the deviant. The characterization of some family groupings as deviant legitimates state intervention and the regulation of relationships well beyond what would be socially tolerated if directed at more traditional family forms.

Also posted is the Introduction to FEMINIST AND QUEER LEGAL THEORY. Here's the abstract:

This essay forms is the introduction to Feminist and Queer Legal Theory: Intimate Encounters, Uncomfortable Conversations, M.A. Fineman, J. E. Jackson, and A. P. Romero, Eds. (Ashgate 2009). The book explores the tensions among feminist and queer theorists. Wendy Brown (UC-Berkeley) states that it is “possibly the most useful theory anthology of the decade.” In the Introduction the intersecting histories of feminist and queer legal theories are considered and the convergences and departures are addressed.