Balogh's Government out of Sight

Brian Balogh, Miller Center for Public Affairs and History Department, University of Virginia, will be discussing his new book A Government out of Sight: The Mystery of National Authority in Nineteenth-Century America. He’ll be discussing the book over the radio, on-line and via podcast during the week of January 16-21, 2010. More information is here; here’s a brief description of the book: 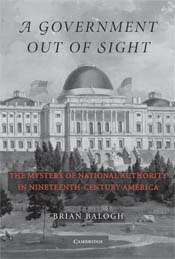 How big a role should the American government play? Should it be shelling out billions for public works and other projects? Is such government involvement unprecedented? Many historians assume the U.S. government of the 19th century to be hands-off; quintessentially laissez faire. Politicians and analysts who champion such a style of government even regard it as a sort of golden age.

A Government Out of Sight fundamentally alters our perspective on American political development in the 20th century, shedding light on contemporary debates between progressives and conservatives about the proper size of government and government programs.

Update: Check out Gautham Rao's review, Out of Sight, But on the Horizon: The Secret Life of the American Nation-State, in Common-Place.
Posted by Dan Ernst at 12:30 AM