Rakove's and Lipsky's Constitutional annotations, Menand on the University, and more in the book reviews

THE CITIZEN’S CONSTITUTION: An Annotated Guide by Seth Lipsky and THE ANNOTATED U.S. CONSTITUTION AND DECLARATION OF INDEPENDENCE, edited by Jack N. Rakove were reviewed together last week by Adam Liptak in the Ne

w York Times. It is a good comparison of the two books, quite useful if you are looking for a gift for your favorite law student. Liptak writes:

Lipsky has a lighter touch throughout...But as he finishes with the Constitution’s first two articles, he loses some steam....

Rakove, on the other hand, gains momentum as his book progresses. His writing becomes slyer, shedding some of its textbook quality. He also becomes more judgmental, a quality mostly missing in Lipsky.

Lipsky rarely makes ideological points and does not promote interpretive theories, whereas Rakove occasionally pushes back against originalism, the theory that the meaning of the Constitution was fixed at the time of its adoption. 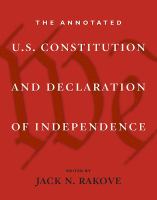 ere.
The Marketplace of Ideas: Reform and Resistance in the American University by Louis Menand is reviewed by Wesleyan University President Michael S. Roth in the Los Angeles Times. Menand

describes the evolution in this country of a model in which the college years have been kept separate from anything that resembles vocational or professional training. Defenders of either the "books everyone should have read" POV or of the "skills everyone should have acquired" have usually been stymied by "a superstition: that the practical is the enemy of the true." Menand's message here: It doesn't have to be this way.

GAME CHANGE: Obama and the Clintons, McCain and Palin, and the Race of a Lifetime by John Heilemann and Mark Halperin is reviewed in the New York Times and the Washington Post.

And in blog news, a Military History Carnival is up at Edge of the American West. (A carnival is a round-up/synthesis of many related blog posts.) And Claire Potter has begun the incredibly helpful Sunday Radical Round-up at Tenured Radical.