﻿I recently stumbled upon the syllabus for the course on Israeli Legal History that Assaf Likhovski, an associate professor at Tel Aviv University Faculty of Law, taught while visiting at the UCLA Law School in the Spring 2010 semester. I was particularly struck by his comparativist approach, as articulated in the course description, which I post here with Professor Likhovski’s permission: 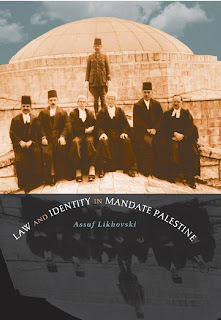 Israel, like the United States, is a settler society whose establishment was inspired by utopian ideology but was also based on war and violence. Like the United States, Israel is an imperfect democracy, committed to notions of equality yet also divided along class and ethnic lines. In both Israel and the United States law plays a major role in shaping identity, framing political discourse and mediating (and also sometimes exacerbating) social conflicts. In what ways do law and society interact in Israel and what can Americans learn from the Israeli experience? This course will seek to answer these questions by exploring the history of Israeli law. After an introductory section containing a brief overview of Israeli history and a general introduction to legal history, the course will focus on two distinct periods: the British Mandate and the first two decades after Israeli independence. Law will be used as a prism through which major debates about the history of the Israeli state and Israeli society will be analyzed. Among the topics that will be discussed are the reception of English law after the British conquest, law and national identity, varieties of legal pluralism, postindependence legal change and continuity, formalism and rights discourse, the role of law in ethnic, class and gender conflicts and in shaping historical memory (with special emphasis on the Holocaust). No prior knowledge of the history of Israel or its law is assumed.

Of course one has to make hard choices in a course such as this, still, I was surprised not to see at least several titles from among the following, most of which I think would be fundamental (unlike, say, the Said volume):

Falk, Richard and Burns H. Weston. ‘The Relevance of International Law to Palestinian Rights in the West Bank and Gaza: In Legal Defense of the Intifada,’ Harvard International Law Journal 32, No. 1 (1991): 191-204.

Kattan, Victor. From Coexistence to Conquest: International Law and the Origins of the Arab-Israeli Conflict, 1891-1949. London: Pluto Press, 2009.

Kretzmer, David. The Occupation of Justice: The Supreme Court of Israel and the Occupied Territories. Albany, NY: State University of New York Press, 2002.

Marmor, Andrei, ‘Entitlement to Land and the Right of Return: An Embarrassing Challenge for Liberal Zionism’ (2003), USC Law and Public Policy Research Paper No. 03-17. Available at SSRN: http://ssrn.com/abstract=424622

With regard to the comparative aspect: Unlike the United States, Israel constitutionally, hence legally (yes, I know, there is not a written constitution as such, but Basic Law plays a central part in its 'constitutional' law) defines itself terms of a single religious (or, less plausibly 'ethnic') tradition, Judaism, and thus is a "Jewish and democratic state." This theocratic dimension is in stark contrast to the United States' constitutional understanding of the role of religion in a democratic polity.