Here are a few thoughts prompted by that symposium on how to write a law school history that Mary notes here. 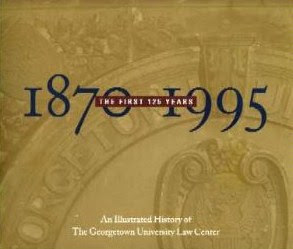 I missed a reference in the panel discussion to John Henry Schlegel and Alfred Konefsky’s brilliant (and often hilarious) review essay, “Mirror, Mirror on the Wall: Histories of American Law Schools,” Harvard Law Review 95 (1982): 833. When I wrote the greater part of a book on Georgetown Law, I was never quite free of the fear that the pair would savage it in a sequel.

Among the challenges of writing an institutional history that Konefsky and Schlegel dwelt upon was the problem of periodization. The pair rejected the "decanal synthesis," in the history of the school is organized around the succession of its deans, as a nonstarter, no more promising for the history of legal education than the "presidential synthesis" was for political history. I tend to agree: while the right deans could make a big difference, they usually did so because some more fundamental development made new departures possible. To invoke a more weighty sentiment than perhaps the subject warrants: "Men make their own history, but they do not make it as they please; they do not make it under self-selected circumstances, but under circumstances existing already, given and transmitted from the past."

Laura Kalman makes perhaps the strongest case for a dean with Guido Calabresi in Yale Law School and the Sixties. For my part, I thought that Paul Dean transformed Georgetown in the 1960s, but I also thought that a more general development, the greater assertiveness of the laity within the Catholic church, made it possible for Dean to do as much as he did. That's why I defined the eras in the history of Georgetown Law in terms of the relative importance of the laity or the clergy in its dominance. Writing in 1995, I saw three periods: (1) a founding era, in which a section of Maryland's social elite, that traced its ancestry back to the English Catholics who settled the colony, attempted (and failed) to create a genteel and Democratic alternative to Washington's other "mass" and Republican-leaning law schools; (2) a middle passage in which the school was under the tutelage of Jesuit regents (including, most famously Father Francis Lucey, who led the Catholic attack on Holmes and the legal realists); and (3) a liberal era in which the school embraced secular notions of professionalism and the politics of the Great Society.

When Schlegel and Konefsky surveyed the law schools histories, the dominant approach to periodization they discovered--and railed against--was what might be termed the "Harvard" or "Langdellian" synthesis. That is, authors organized their accounts in terms of their schools' gradual adoption of the package of reforms that Christopher Columbus Langdell brought to the Harvard Law School, including a three-year, sequentially arranged curriculum of graded course; a full-time, scholarship-producing curriculum; rigorous entrance requirements; the case method of instruction. Robert Stevens demonstrated the power of the Langdellian synthesis in Law School, a landmark history of legal education, but, as Schlegel and Konefsky observed, it inclined authors to downplay the peculiarities of their schools and rendered anticlimactic the many years after a school adopted the Langdellian reforms. More importantly, whether they intended to or not, the Langdellian synthesizers tacitly valorized an approach to legal education that served the interest of a particular (and particularly powerful) branch of the American legal profession, the corporate bar. It sorted on those intellectual and perhaps emotional traits that the law firms valued in their associates and partners and, as Robert Gordon argued, it provided Wall Streeters with powerful legitimating ideologies. Whatever the merits of the Langdellian synthesis for the handful of law schools that fed the corporate bar, it encouraged authors of other institutions to overlook how their institutions served other sectors of the legal profession. 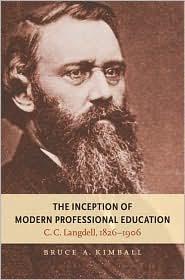 All of which makes the present a particularly interesting time in the writing of the history of American legal education. In 2006, under Dean Elena Kagan, Harvard publicized its a break with Langdell by introducing a class on the regulatory state in the first-year curriculum. (I can't resist the aside that Willard Hurst anticipated his alma mater by over six decades.) If, as one of Stevens's chapter titles proclaimed, "Harvard Sets the Style," other law schools should feel free to join Cantabrigians in stepping out from the long shadow of the great dean. Further, the appearance of Bruce Kimball's biography lets us see Langdell's own achievements and failures more clearly than ever before. I doubt Kimball sees it this way, as he interprets Langdell's deanship as the inception of an era in the history of professional education that is with us still. But perhaps from the narrower vantage point of the history of legal education, the publication of his biography represents the taking flight of the owl of Minerva, and we're finally understanding the dawn of a Langdellian era just as it comes to a close.

I'm not prepared to anoint some new basis for periodizing legal education as the most promising, if only because, in any well-crafted history, periodization follows causation, so that the periodization an author adopts should follow his or her own notion of what makes the history of legal education go. But I do hope that they give the economic history of the American legal profession as serious try-out--both the the economic history of the legal profession as a whole and that of the particular segment their school has served. Langdellianism was never just about grading the beef for the corporate bar or legitimating its power, but the fillip that the calamitous conditions in the market for corporate lawyers is giving to experiential learning as law schools scramble to find new placements for their graduates suggests something of the explanatory power of an economic approach.

For the most part, the contributors to Professor Jarvis's symposium follow their mandate to discuss the nuts-and-bolts of writing law school histories, rather than such matters, although Professor Michael Landon, the author of The University of Mississippi School of Law: A Sesquicentennial History did urge would-be authors to "compare, at different points in time, what was going on in [their] law school[s] with what was going on in other law schools around the country." I was interested to see that in writing his history of the Cumberland School of Law David Langum felt the same conflict I did in producing the Georgetown book. When I got to that part of the school's history that was within the living members of its faculty, I decided that I could be either a good colleague or a good historian but not both. Professor Langum and I took the same way out: we let someone else write up the recent past and accept that the result would be "strictly an 'upward and onward' puff piece." Langum and his coauthor frankly announced this plan of action in their preface. I attempted to send the same message by claiming authorship of only the first two sections of the book. To quote a great rock poet: "Two out of three ain't bad."

What I appreciate most in the discussion was the panelists' reports of their conversations with the deans who commissioned their books. All insisted that their books--or their portions of the book--would have to be, in Professor Langum's phrase, "serious analytical history." As Professor Landon recalled, "I stressed that if I did it, what I wanted to write was an in-depth, heavily researched monograph . . . . that would include not just the highs in the law school's history, but also the lows and the ins and the outs." The deans agreed, moved by the wisdom of Langum's view that a Whiggish account "in which the vicissitudes of the past led inevitably to the triumphs of the present . . . . would do little to enhance the school's reputation." May future decanal patrons be so wise!
Posted by Dan Ernst at 7:56 AM