New from the University of Virginia Press: A Storm Over This Court: Law, Politics, and Supreme Court Decision Making in "Brown v. Board of Education," by Jeffrey D. Hockett (University of Tulsa). Here's a description from the publisher: 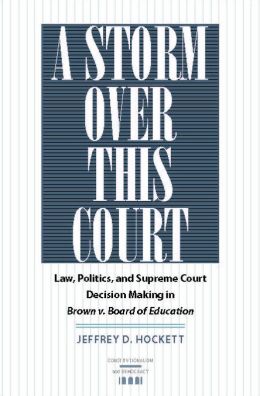 On the way to offering a new analysis of the basis of the Supreme Court’s iconic decision in Brown v. Board of Education, Jeffrey Hockett critiques an array of theories that have arisen to explain it and Supreme Court decision making generally. Drawing upon justices’ books, articles, correspondence, memoranda, and draft opinions, A Storm over This Court demonstrates that the puzzle of Brown’s basis cannot be explained by any one theory.

Borrowing insights from numerous approaches to analyzing Supreme Court decision making, this study reveals the inaccuracy of the popular perception that most of the justices merely acted upon a shared, liberal preference for an egalitarian society when they held that racial segregation in public education violates the equal protection clause of the Fourteenth Amendment. A majority of the justices were motivated, instead, by institutional considerations, including a recognition of the need to present a united front in such a controversial case, a sense that the Court had a significant role to play in international affairs during the Cold War, and a belief that the Court had an important mission to counter racial injustice in American politics.

A Storm over This Court demonstrates that the infusion of justices’ personal policy preferences into the abstract language of the Constitution is not the only alternative to an originalist approach to constitutional interpretation. Ultimately, Hockett concludes that the justices' decisions in Brown resist any single, elegant explanation. To fully explain this watershed decision—and, by implication, others—it is necessary to employ a range of approaches dictated by the case in question.


Examining oral arguments, Supreme Court memoranda, and the private papers of the justices, Hockett weaves a rich tapestry of the many threads that led the nine Supreme Court justices to unanimously hold school segregation unconstitutional in Brown v. Board of Education. Focusing on the thinking of each justice, Hockett offers a fascinating examination of judicial sausage-making in one of the Court’s most famous decisions. -- Gerald N. Rosenberg

It looks like full text is available to subscribers of Project Muse.
Posted by Karen Tani at 12:30 AM