Ross's "World War I and the American Constitution" 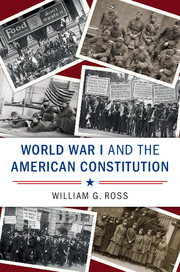 The First World War profoundly affected the American political system by transforming constitutional law and providing the predicate for the modern administrative state. In this groundbreaking study, William G. Ross examines the social, political, economic and legal forces that generated this rapid change. Ross explains how the war increased federal and state economic regulatory powers, transferred power from Congress to the President, and altered federalism by enhancing the powers of the federal government. He demonstrates how social changes generated by the war provided a catalyst for the expansion of personal liberties, including freedom of speech, freedom of the press, and the rights of women, racial minorities, and industrial workers. Through a study of constitutional law, gender, race, economics, labor, the prohibition movement, international relations, civil liberties, and society, this book provides a major contribution to our understanding of the development of the American Constitution.


In this comprehensive and engaging history, distinguished scholar William G. Ross demonstrates that the First World War touched nearly every aspect of American constitutional history. This book is an essential starting point for students and a fresh reinterpretation for experts.' Christopher Capozzola, Massachusetts Institute of Technology and author of Uncle Sam Wants You: World War I and the Making of the Modern American Citizen