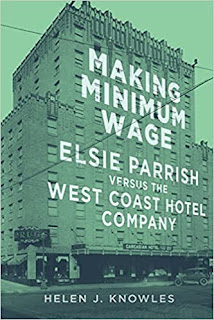 West Coast Hotel v. Parrish pitted a Washington State hotel against a chambermaid, Elsie Parrish, who claimed that she was owed the state’s minimum wage. The hotel argued that under the concept of “freedom of contract,” the US Constitution allowed it to pay its female workers whatever low wages they were willing to accept. Knowles unpacks the legal complexities of the case while telling the litigants’ stories. Drawing on archival and private materials, including the unpublished memoir of Elsie’s lawyer, C. B. Conner, Knowles exposes the profound courage and resolve of the former chambermaid. Her book reveals why Elsie—who, in her mid-thirties was already a grandmother—was fired from her job at the Cascadian Hotel in Wenatchee, and why she undertook the outsized risk of suing the hotel for back wages.

Minimum wage laws are “not an academic question or even a legal one,” Elinore Morehouse Herrick, the New York director of the National Labor Relations Board, said in 1936. Rather, they are “a human problem.” A pioneering analysis that illuminates the life stories behind West Coast Hotel v. Parrish as well as the case’s impact on local, state, and national levels, Making Minimum Wage vividly demonstrates the fundamental truth of Morehouse Herrick’s statement.

“In Making Minimum Wage, Helen J. Knowles ingeniously draws on a wealth of sources to make one of the most important of all the Supreme Court’s New Deal decisions come alive. With remarkable humanity, Knowles transforms the story of Elsie Parrish into an illuminating prism on the history of minimum wage legislation for women.” —Laura Kalman, author of The Long Reach of the Sixties: LBJ, Nixon, and the Making of the Contemporary Supreme Court

“This book brilliantly turns West Coast Hotel v. Parrish inside out, revealing the human struggles and experiences behind the doctrinal revolution of 1937. Helen J. Knowles rightfully places Parrish and her advocates at the center of New Deal labor politics and recovers a critical piece of the forgotten struggle over women’s minimum wages. This highly readable book will delight and fascinate anyone interested in labor history, constitutional development, or the regulation of women’s work in the United States.” —Julie Novkov, author of The Supreme Court and the Presidency: Struggles for Supremacy