William Novak’s Philip Pro Lecture in Legal History at the William S. Boyd School of Law, University of Nevada, Las Vegas, last week, is now available online.  (The sound soon after David Tanenhaus begins his introduction, so hang in there.)  Professor Novak spoke about his new book, New Democracy: The Creation of the Modern American State (Harvard University Press, 2022), in its own right and in relation to his first book, The People’s Welfare.  Independently, he was interviewed about the new book on Current. 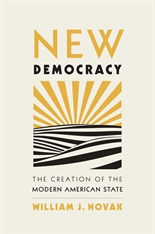 In the period between the Civil War and the New Deal, American governance was transformed, with momentous implications for social and economic life. A series of legal reforms gradually brought an end to nineteenth-century traditions of local self-government and associative citizenship, replacing them with positive statecraft: governmental activism intended to change how Americans lived and worked through legislation, regulation, and public administration. The last time American public life had been so thoroughly altered was in the late eighteenth century, at the founding and in the years immediately following.

William J. Novak shows how Americans translated new conceptions of citizenship, social welfare, and economic democracy into demands for law and policy that delivered public services and vindicated people’s rights. Over the course of decades, Americans progressively discarded earlier understandings of the reach and responsibilities of government and embraced the idea that legislators and administrators in Washington could tackle economic regulation and social-welfare problems. As citizens witnessed the successes of an energetic, interventionist state, they demanded more of the same, calling on politicians and civil servants to address unfair competition and labor exploitation, form public utilities, and reform police power.

Arguing against the myth that America was a weak state until the New Deal, New Democracy traces a steadily aggrandizing authority well before the Roosevelt years. The United States was flexing power domestically and intervening on behalf of redistributive goals for far longer than is commonly recognized, putting the lie to libertarian claims that the New Deal was an aberration in American history.

And here are some endorsements:

This much anticipated book is a magisterial revision of the history of modern American governance. More powerfully than any work I have read, it shows concretely when and how the modern American state took shape and what made it fundamentally different from what came before. Perhaps even more important, Novak’s account centers democracy in a way other works have simply overlooked. Outstanding, truly field-changing, New Democracy is sure to spark vital conversations for decades to come.”—Karen M. Tani, author of States of Dependency: Welfare, Rights, and American Governance, 1935–1972

“Novak’s dazzling New Democracy offers a striking reconceptualization of a pivotal era in the history of American governance. As he demonstrates, brilliantly and convincingly, the New Deal was built upon the radical ideas and novel administrative practices that reshaped American politics and law in the decades preceding FDR’s election in 1932.”—James T. Kloppenberg, author of Toward Democracy: The Struggle for Self-Rule in European and American Thought

“In this sweeping and provocative book, Novak forces us to think anew about public power and democracy in America and how both were transformed in the period from 1866 to 1932. Encompassing everything from citizenship to social policy, the profound changes he chronicles notably preceded the New Deal. Novak challenges us as never before to reexamine what we thought we knew about ‘the creation of the modern American state.’”—David A. Moss, author of Democracy: A Case Study

“A grand synthesis that retells the story of the rise of the modern American state by examining the fundamental grammar of state-building. Novak shows that Americans took ideas about citizenship, police power, public utility, social welfare, antimonopoly, and, most importantly, democracy and invested them with new power and meaning between the close of the Civil War and the beginning of the Great Depression. They laid the foundations for how Americans would continue to grapple with public problems, and how they would struggle over the meaning of democratic governance. A fitting capstone to a brilliant career.”—Kenneth W. Mack, author of Representing the Race: The Creation of the Civil Rights Lawyer

“The Progressive period, the decisive turning point in the rise of modern American government, law, policy, and planning, has attracted some of the greatest historians of our time. Novak now joins their ranks with New Democracy, dazzling in its erudition and provocative argumentation. It will be impossible to think about Progressivism—and the American state today—without reading this book first.”—Thomas J. Sugrue, author of The Origins of the Urban Crisis: Race and Inequality in Postwar Detroit

“Novak’s New Democracy is a remarkable achievement. Beautifully written and superbly researched, it illuminates the transformation of the American system of government between the Civil War and the New Deal, debunking the myths of both a weak American state and the New Deal as an aberration. An essential read for anyone who cares about the past and future of American democracy.”—Kate Andrias, Columbia Law School