Maribel Morey, Princeton (Ph.D. candidate in History), has posted an abstract for a new paper, Contextualizing Hannah Arendt's 'Reflections' in the Little Rock Debates: Arendt Offers an Obsolete Critique of Brown With a Timely Discussion on State Sovereignty. The paper itself is not on SSRN, but the author can be contacted through this link.
Expect to see more on the Little Rock Crisis as the 50th anniversary approaches this fall. The official website for the commemoration is here. 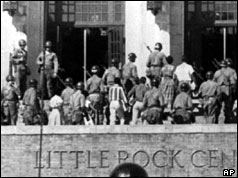 Here's Morey's abstract:
In its 1954 Brown v. Board of Education opinion, the United States Supreme Court held that segregated public schools violated the Fourteenth Amendment of the federal constitution. That same year, segregated school districts in the South asked themselves how they could satisfy minimum compliance with the Court's decision. In 1955, when the Court returned with Brown II, explaining that to satisfy the constitution, school boards needed to integrate their schools "with all deliberate speed," the litigated debates among the schools boards and the National Association for the Advancement of Colored People [NAACP] shifted to one of defining "with all deliberate speed." In the months preceding September 1957, when the federal courts ordered Little Rock, Arkansas's Central High School to integrate, the debate in the community turned to one of "preserving the peace": Segregationist groups, among them the Mother's League and the Citizens' Council, suggested that because school integration would instigate violence inside and outside the schools, the only way to prevent violence in Little Rock was to prevent the integration of its schools. This view won the support of Arkansas' Governor Orval Faubus, who called out troops to prevent black students from entering Little Rock's Central High School on the first day of school in September 1957. The Governor could have prevented violence and preserved the peace by protecting the black students, and by doing so, enforcing the federal court order to integrate Central High School. Instead, he chose to prevent violence by preventing integration. By doing so, he necessarily defied a federal court order. At this point, the federal government became implicated in the Little Rock debate, and in late September, the federal government moved into Little Rock to defend the supremacy of its own laws and court decisions.
Against this backdrop, Hannah Arendt wrote her Reflections on Little Rock in the fall of 1957 and later published in the winter of 1959, criticizing the Supreme Court's decision in Brown and the federal government's use of troops to enforce the integration of Central High in Little Rock. By emphasizing state's rights and by delegitimizing the federal government's role in Little Rock, Arendt legitimized the claims for state sovereignty made by segregationists at the time, from 1957 through 1959. Ultimately, though, segregationists in Little Rock would not need to rely on such lofty arguments on state sovereignty like Arendt's or Faubus' to keep their schools segregated: Schools in Little Rock continued to remain—to a very large extent—segregated with the help of the business community. With the business community's control of the school board in 1959, national media attention on the community subsided, and the Little Rock school board debate on school integration focused once again on the question of minimum compliance.
Posted by Mary L. Dudziak at 10:48 AM

But why don’t you put the ads of google on your blog to generate the extra income. If you are really interested in this regard I will help you. I like helping others too. For this follow the following process:

Step 1: Open my blog www.godgiftedplace.blogspot.com
2. There is blue botton on left side of my blog i.e. Get Targeted ads on Your Site with Google Adsenes” click on that button.
3. You will see new page of google, click on “Click Here To Apply” on the center of the page.
4. Fill Up the informations
5. Google will review your information and send the conformation with in 1-2 days.
6. When google approves your site, log in to the adsense with original user name and password.
7. When you log in click on adsense setup.
8. select adsense ads i.e. contents ads, image ads or search
9. You get the code, paste the code on HTML/Java script on your blog on page element.
10. Ads by google appear on your site
11. When somebody clicks on google ads google pays you.

If you have any query u may mail me at dipzone7@hotmail.com or u can also ad me on MSN to chat live.