Gustafson on Public Assistance and the Criminalization of Poverty 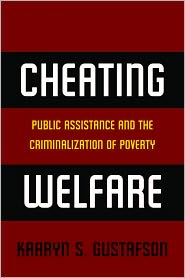 Historians of anti-poverty law and criminal law may be interested in this new release from NYU Press: Cheating Welfare: Public Assistance and the Criminalization of Poverty, by Kaaryn Gustafson (University of Connecticut School of Law).


Over the last three decades, welfare policies have been informed by popular beliefs that welfare fraud is rampant. As a result, welfare policies have become more punitive and the boundaries between the welfare system and the criminal justice system have blurred—so much so that in some locales prosecution caseloads for welfare fraud exceed welfare caseloads. In reality, some recipients manipulate the welfare system for their own ends, others are gravely hurt by punitive policies, and still others fall somewhere in between.

In Cheating Welfare, Kaaryn S. Gustafson endeavors to clear up these gray areas by providing insights into the history, social construction, and lived experience of welfare. She shows why cheating is all but inevitable—not because poor people are immoral, but because ordinary individuals navigating complex systems of rules are likely to become entangled despite their best efforts. Through an examination of the construction of the crime we know as welfare fraud, which she bases on in-depth interviews with welfare recipients in Northern California, Gustafson challenges readers to question their assumptions about welfare policies, welfare recipients, and crime control in the United States.

Austin Sarat (Amherst) describes the book as “[a] fascinating account of the welfare system seen from the perspective of welfare recipients.”

The introduction and TOC are available here.