Readers may be interested in the latest batch of reviews from the Law & Politics Book Review. 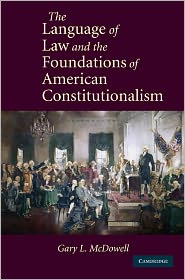 Stephen M. Feldman (University of Wyoming) reviews The Language of Law and the Foundations of American Constitutionalism (Cambridge University Press), by Gary L. McDowell ("On the one hand, it is a brilliant history, meticulously researched, but on the other hand, it is marred by its blatant political goal."). [here]

Jeannine Bell (Indiana University Maurer School of Law-Bloomington) reviews Degradation: What the History of Obscenity Tells Us About Hate Speech (New York University Press), by Kevin W. Saunders (aiming "not just to demonstrate the similarities between these two types of speech, but also to suggest how examining the legal treatment of obscenity in the United States can guide the sanctioning of hate speech"). [here]

Michelle D. Deardorff (Jackson State University) reviews The Myth of American Religious Freedom (Oxford University Press), by David Sehat ("an engaging exploration of the continuous and seemingly irreconcilable debates over the meaning of the free exercise clauses found in the federal Constitution and in numerous state-governing documents"). [here]