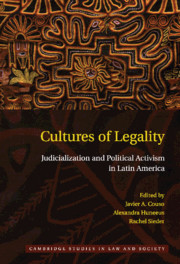 Latin America democratized in the 1980s and underwent profound constitutional transformations. It has proven easier to implement electoral democracy, however, than to realize constitutional guaranties. How to institutionalize the operative rules of the democratic game has become, therefore, a pressing research issue. While there is a reasonably vast literature on democratization, the literature on how to make constitutions work, on the other hand, is significantly thinner. The relative dearth of literature on constitutionalism says less about the importance of the topic than it does about the state of interdisciplinary scholarship in academia.

CULTURES OF LEGALITY: JUDICIALIZATION AND POLITICAL ACTIVISM IN CONTEMPORARY LATIN AMERICA plays an important role in helping to fill this gap. It is a challenging collection of essays written by a group of first-rate scholars well versed in the political science literature on courts. The introduction (Huneeus et al. at pp.3, 7) defines legal culture as a set of contested and changing ideas and argues it is a useful construct in understanding the role that courts play in the new democracies throughout the region. Although ideas matter in understanding why citizens are increasingly turning to courts to deal with disputes once thought to be political in nature and why courts are responding with useful outputs, the role of legal ideas has been understudied and under-theorized by the social science scholarship on courts (Schor 2009, pp.188-192).

The various chapter studies both deepen and challenge the thesis that ideas matter in understanding judicial behavior. Kapiszewski’s (pp.51, 52) study of the Brazilian national high court argues that we need to combine institutional and cultural explanations for an adequate account of why courts “become engaged in politics.” Judicial independence and professional competence are a necessary but not a sufficient explanation for judicial behavior. Kapisweski (p.59) concludes that judicial “ideas about law and the judicial endeavor, and the practices they develop as they do their job, are at the heart of the cultural approach to explaining judicial decision-making.” The Mexican Supreme Court presents a puzzle since it first inserted itself into politics by vigorously enforcing separation of powers rather than effectuating constitutional rights. Ansolabehere (p.78) explores the role of “interpretive frameworks” in explaining why that court is becoming more active in effectuating rights. Huneeus [*457] examines why national high courts in Chile, Argentina, and Venezuela have resisted rulings from the Inter-American Court of Human Rights. The answer, she suggests (p.112), is that “judicialization and regional integration are not mutually reinforcing phenomena but, rather, in competition.”

Continue reading here.
Posted by Mary L. Dudziak at 8:26 AM