Reviewed: Groebner, Who Are You? Identification, Deception, and Surveillance in Early Modern Europe

WHO ARE YOU? Identification, Deception, and Surveillance In Early Modern Europe, by Valentin Groebner, translated by Mark Kyburz and John Peck (Zone) is reviewed this Sunday in the Washington Post by Michael Dirda. Dirda writes, in part:
Who Are You? finds the origins of our identity-obsessed culture in the Middle Ag 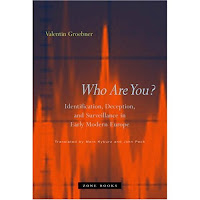 es and early Renaissance. In quick-moving chapters, Groebner examines how portraits, badges, seals, clothes, tattoos, letters of safe conduct, and paper certificates helped people to recognize others whom they had never seen before. Such insignia would also be used to indicate inclusion or exclusion. Former prisoners and slaves might bear special tattoos, but so did charismatic religious leaders: Crosses branded on foreheads were common. Beggars had to be as identifiable as foreign envoys.
Technology and the culture of identification developed in tandem. When courier services spread throughout Europe, so did the wanted poster. As governments used various badges to distinguish their agents, so, too, the members of robber bands took up their own secret insignia....
During the 16th century -- an age of "dissimulation," according to Montaigne -- governments increasingly strove to "register everyone and everything." But what was the historical outcome? "The rise of the con man and the impostor, together with their official counterparts, the diplomat and the spy equipped with authentic counterfeit papers. Their careers in dissimulation took place not in spite of, but through the expanding systems of bureaucratic control." Before long, "the scribes of early modern Europe produced mountains of paper abounding with forged attestations, false details, and invented names."
Why was such documentation so important to governments? For the same reasons it is today. In 1796, the German philosopher and historian Johann Gottlieb Fichte wrote: "The chief principle of a well-regulated police state is this: That each citizen shall be at all times and places . . . recognized as this or that particular person. No one must remain unknown to the police. This can be attained with certainty only in the following manner. Each one must carry a pass with him, signed by his immediate government official, in which his person is accurately described. . . . No person should be received at any place who cannot thus make known by his pass his last place of residence and his name."
For the rest, click here.
Posted by Mary L. Dudziak at 9:10 AM