Campbell on the Underground Railroad, and Ricks, Escape on the Pearl 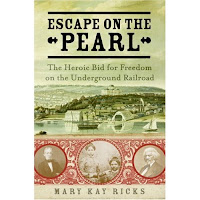 d,
a world in which history and folklore, memory and myth, have become so interwoven as to be inextricable. To be sure, there were covert networks to assist fugitive slaves -- a 'railroad,' in the inevitable metaphor of the era -- but the system was less organized and extensive (and distinctly less white) than most Americans today imagine. The countless white Northerners who point proudly to the basement or the old barn where their forbears sheltered escaped slaves are, more often than not, engaging in wishful thinking.
At its best, the abiding national fascination with the Underground Railroad honors the memory of courageous men and women who challenged a violent and inhumane system. But there are perils here. Focusing on the flight from slavery rather than on slavery itself not only indulges our appetite for celebratory history -- Americans love nothing more than stories of righteous individuals overcoming insuperable odds -- but also contributes to the myth that slavery and racism were exclusively Southern matters. Much as exaggerated tales of the Resistance have long obscured French complicity in the Holocaust, so have stories of the Underground Railroad helped Northerners evade any sense of responsibility for slavery and its abiding legacies.
About Ricks, Campbell writes:
In April 1848, more than 70 enslaved African Americans boarded a schooner, the Pearl, in Washington, D.C., and sailed for freedom. Unfortunately, a storm on Chesapeake Bay forced the Pearl to seek shelter, allowing a posse on a pursuing steamship to apprehend the ship and its passengers.

The sheer scale of the venture made the Pearl episode a cause celebre. While Sen. John C. Calhoun pressed for new fugitive-slave legislation to stem "these atrocities, these piratical attempts" to steal legal property, invigorated abolitionists such as Harriet Beecher Stowe raised money to purchase freedom for some of the fugitives and to provide a legal defense for the ship's captain (who appears to have taken the job chiefly for financial reasons). Ricks devotes the bulk of her engaging book to the aftermath of the escape, focusing in particular on the travails of two teenage girls, Mary and Emily Edmonson, whose passage from the Pearl to the New Orleans slave market to Oberlin College is as dramatic as anything in Stowe's bestselling Uncle Tom's Cabin.
For the rest, click here.
Posted by Mary L. Dudziak at 6:59 PM