In disturbing new study, Economists find that History is Inefficient

It is an age-old saying: “Those who forget history are doomed to repeat it.” But this assumption is under fire in a new study by economists, released today. Eric L. Talley, a UC Berkeley economist and Principal Investigator for the study, described it this way: “using sophisticated methodological techniques, we have found that those who remember history are as likely to repeat it as those who do not. Although the results are surprising, they are resoundingly clear: history is inefficient.” The authors recommend that resources currently devoted to the study of history be redirected.

While many historians have responded with shock, the reaction has been varied. Some immediately took the study to heart. "I've often worried that studying history was pointless,” remarked legal historian John Fabian Witt, Columbia, “and the Talley study pretty much proves it. I've decided to switch to economics.” He continued: “honestly, I've always secretly wanted to be an economist. So clean, so crisp, none of these messy facts to get in the way. I think I’ll take up recursive modeling of dynamic linear economies. I used to be so anecdotal; from now on it's only stochastic linear difference equations for me."

The implications of this study for legal historians are, of course, profound, so I am posting the complete executive summary, below.

EXECUTIVE SUMMARY
This experimental study was designed to test the oft-utilized maxim that “those who forget history are doomed to repeat it.”[1] In an earlier pilot study, we administered a written test to 351 college seniors assessing their knowledge of significant mistakes made by leaders throughout world history (e.g., Napoleon’s & Hitler’s invasions of Russia; Hoover’s response to the crash of 1929; George H.W. Bush’s projectile vomit into the lap of Japanese Premier Miyazawa; Monica Lewinsky). We then compared the choices of subjects who had passed the test against those who failed it when confronted with experimental vignettes based on key moments from history. We rejected the null hypothesis that the two groups behaved identically, versus the alternative hypothesis that the forgetters were more likely to repeat historical mistakes (p=0.049973, one-tailed test). On the basis of these preliminary findings, we concluded that the above adage about repeating history had clear empirical support.
The instant study demonstrates that our previous conclusions were unsound. While the pilot was interesting and provocative, it suffered from two significant methodological flaws. First, we could not exclude the possibility that the observed correlation between history forgetfulness and mistake recidivism might have been due to reverse causality or unobserved variables (e.g., diet, exercise, etc.). Second, the pilot study did not attempt to check the robustness of our results over time.
In order to address the first flaw (endogeneity bias), we significantly refined the study design to introduce an independent instrument for forgetfulness. We invited back into the laboratory only those subjects from the pilot study who had passed the diagnostic history exam (n=146). Those subjects were then asked to drink a glass of pomegranate punch laced with pentobarbital (a concoction we identified only as “smart juice”), causing them to lose consciousness for 3-5 hours. While unconscious, approximately half of the subjects (the treatment group, n=75) received trans-orbital lobotomies to the anterior cingulate area of the cortex – the region of the brain that neuro-economists have identified as being activated during long-term memory retrieval. The remaining subjects (the control group, n=71) received a superficial temporal incision, a few sutures, and a Sponge Bob Square Pants bandage. Each subject’s group assignment was determined by a random process.[2]
To address the second weakness in our pilot study (dynamic robustness), we tracked the treatment and control groups over the ensuing 24 weeks, observing them in multiple experimental vignettes fashioned after watershed decision-making moments in history. The results were striking, as can be seen in Figure 1, which illustrates the mean recidivist error frequencies of the two groups as a function of time.[3] 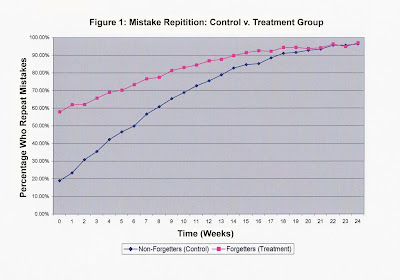 Initially, forgetters in the treatment group were almost three times as likely to repeat historical mistakes than were their counterparts in the non-forgetter control group (p=0.000021). However, over time the error rates of both the forgetters and the non-forgetters converged to the mid-90% range, steady-state frequencies that are statistically indistinct from one another (p=0.99899). Evidently, virtually all subjects were doomed to repeat history, whether lobotomized into forgetting it or not.

This finding has significant implications for the social value of studying history. Most immediately, our results suggest that the study of history is inefficient. To be sure, learning history might reduce error repetition risk for a couple of weeks, or even a few months if you’re really lucky. But over the long term, the benefits of a history education as a means for obviating habitual mistakes are modest to nonexistent. Viewed in this light, we would do well to consider redirecting social resources towards more cost-effective vehicles for preventing recidivist historical error. For example, we might impose a Pigouvian tax on habitual mistakes, or subject those who make them to ritualistic public humiliation, social ostracism, and civil or criminal liability. Alternatively, we could distribute (by auction or lottery) regulatory permits that entitle the holder to repeat historical mistakes, permitting free trade of such permits over an open market (such as the NYSE or eBay). Perhaps more radically, we might explore the possibility of establishing “conditioning camps” in Eastern Nevada or Antarctica for incapacitating and/or reforming mistake-prone individuals. Many of these alternative policy options are admittedly speculative, and accordingly we leave their fuller analysis for future research.

[1] While numerous grammatical permutations of this statement exist, they are all thought to emanate from the early 20th Century works of George Santayana.

[2] Explicitly, two research assistants (representing the control group and treatment group, respectively) conducted independent iterations of the game “Rock-Paper-Scissors,” replaying all ties until a victor emerged. The subject was then assigned to the “victorious” RA’s group, and the process continued ad seriatim until all subjects were assigned. (At their request, the names of the research assistants are being kept confidential).

[3] In the interests of full disclosure, Figure 1 tracks the mean error rates of all control group subjects (n=71), but omits one subject from the treatment group (n=74), who wandered away from the experimental facility shortly after surgery. His current whereabouts are unknown.
Posted by Mary L. Dudziak at 1:01 AM